If it’s not your first visit to our site, you might find some of these familiar. If it is your first visit, here’s a chance to see what we have been up to since we launched this site back in October.

These guitars aren’t in any particular order, unless you consider that they are in the order we thought of them, which might hold some subconscious clues into our minds – but well, thats just scary.

This was chosen because the finish is just amazing. With Suhr quality and sound behind it, it’s kind of a dream guitar.

We chose this one, again, primarily based on the sleek black looks, but also because – well personally I (and many others) feel that when adding humbuckers to a strat you get an amazing shift in sound. SRV wouldn’t play it, but it makes the Strat into something completely different. This continues to be one of the most viewed guitars on the site.

This was the very last Guitar of the Day in 2010. With classic looks and a strat-competitive style, its unique for Epiphone.

One of the most stunning acoustics we have featured so far on the site, with something most acoustics don’t have – a humbucker. So is it an acoustic/electric or a hollowbody electric?

Finding this guitar ended up leading to our interview with Rick Mariner, from Haywire guitars. He is extremely talented and a great guy to talk to. He also makes some of the most beautiful guitars I have seen.

Jems are amazing on so many levels … and both this guitar and the next one are very popular among the readers.

This guitar certainly was the most popular of our Halloween Guitar Series. Before landing on our site, it was returned to the guitar store several times for being “Too vulgar”. 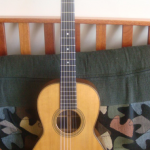 Made in 1894, 116 years old, still playable and it came with certificates and letters of authenticity.

This guitar enjoyed a status most guitars can’t say they have – right or wrong, it was the most expensive guitar on ebay during the time it was listed. At $325,000 it would break the bank for most of us, but it sure is fun to look at!

This guitar has a really cool history and you have to dig to find some of it. We also found a guy with an entire website dedicated to just this guitar, and the man behind it.

We’ve got some plans for more content that will round out your experience on the site and give you plenty of information, news, images, video and fun – all centered around our favorite topic – the guitar.

Have a great 2011 and come back to spend it with us often!