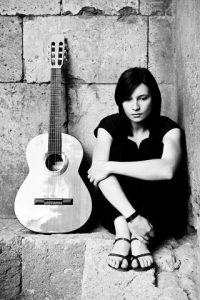 It’s happened to all of us – you’re inspired to play, maybe write a song – you go down to wherever it is that you play, you set up, tune up, warm up, and then … crickets.

The more you think about it the more horrifying it becomes, and the madness slowly builds on itself and before you know it, you’re lost.

Writers block is something that writers of all types have been struggling to beat probably since the beginning of mankind.

So where does it come from? What can you do about it? Is there a way out? Should you just give up and come back later?

Sometimes that is an option, or changing your location (like going outside) is an option. Maybe you’ve tried picking random chords – but then what do you do if it sounds terrible, or ends up being Smoke on the Water party 2011?

The answer lies in understanding writers block and then thinking up creative ways to bust out of it. We sat down today and discussed this a bit, and then came up with a 11 silly ideas that just might work!

We actually came up with about 30 ideas ranging from complete stupidity to “just might work”. But first lets talk a little about what seems to create writers block.

So naturally, to break out of it, you need to either become inspired, or break out of the routine so you will come up with something that might inspire you.

Getting inspired is pretty hard to do at will, however. So what you want to concentrate on is getting yourself to play something that will inspire you. It is much easier to get inspired if you come up with a cool tune or riff.

I’m fully aware that some of these are cheesy. But you might need that. Maybe you’re taking youself too seriously anyway, Mr. Sheen! Speaking of him – notice how he seems to have no filter or shortage of stuff to say? That’s what you’re shooting for. Let the Charlie Sheen out of your guitar. At the very least, you’ll have something to laugh about.

The idea is, change things up to where you can’t fall into your old habits. As soon as you squawk out something cool, go with it. If it doesn’t work out, go back to the change. Relax, take the pressure off yourself, and have fun.

What do you do to overcome guitar writers block? Leave a comment below.

Cool article. Will try out some of these.
Gotta point it out, sorry:

That’s what your shooting for.