14 Guitars With Names, And Stories, And What Became Of Them

Update: Advice for naming your guitar!

Guitarists name their guitars all the time. It seems that – at least for some of the more famous guitars with names – these guitars are very road worn, and they’ve all got great stories to go along with them. We’re going to take a look at 14 of them here.

The duck is a 1971 cream colored Stratocaster, that Yngwie originally purchased in 1978, in Sweden. It’s been in countless photo shoots, and has been featured with Yngwie on many of his album covers.

When Yngwie purchased it, as a teen, and it was Olympic White in color. Since then The Duck has seen a new paint job, several pickup changes (all Seymour Duncans), new frets (after a fan threw a bottle at the guitar and popped off the 17th fret), at least 6 neck (due to headstock breakage) changes. Apparently, the headstock most commonly gets broken when Yngwie throws it up into the air and fails to catch it.

Where is it now? Yngwie is still rocking the Duck, and while he says it is not his favorite Strat, he does think it is one of the best sounding guitars he owns.

This guitar is the source of much controversy, due to the mysterious and attention-getting serial number it has stamped on it: “0001”.

We know it’s not the first ever Stratocaster produced, so the reasoning behind the number remains a mystery. Some theorize that it was made special for an employee of Fender.

The guitar was originally owned by Leo Fender, and then Leo either sold or gave it to Seymour Duncan. Seymour sold it to someone else, for around $900, and that person (whose exact identity is another argument point for some) ended up transferring it to Gilmour.

Seymour Duncan says that there were originally two 0001 Stratocasters, and David Gilmour’s is one that was sent out for repairs, and received a new,  random body.

Either way, it’s a prized possession of Gilmour’s, and he still owns it and uses it on occasion. 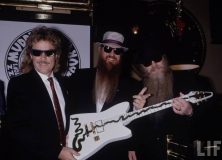 Muddywood isn’t a guitar that Gibbons has toted around on the road and played the crap out of, it’s more of a tribute guitar to Muddy Waters.

It was built from cypress beams that were once a part of the cabin that Muddy Waters grew up in, at Stovall Farms, in Missisippi.

Muddy worked as a tractor driver and sharecropper there.

The guitar was unveiled in 1998 at the Delta Blues Museum, and currently sits in a corner of the restored cabin where Muddy once lived. 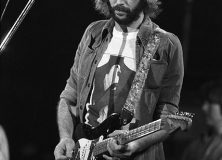 Eric’s first Stratocaster was a brown burst, that he called “Brownie”. After that, it only made sense to call the Black one that came next “Blackie”.

Blackie actually was built from the best parts of three different Strats – which were all from 1956 or 1957. He purchased the guitars – six in total from a guitar store in Nashville. He gave three of them to his friends – Steve Winwood, George Harrison, and Pete Townsend.

The remaining three went together to form Blackie. The first time Blackie got stage time was in January of 1973. The last time he played it in public was in 1991.

Where is it now? In 2004 the guitar was auctioned to raise money for the Crossroads Foundation, Clapton’s own drug and alcohol rehab center. The high bidder? Guitar Center, who walked away with Blackie after bidding $959,500. 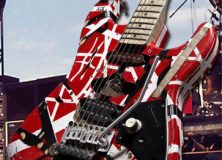 Back when Eddie Van Halen was searching for his “sound” and “feel” from a guitar, there weren’t as many options as we have now. Specifically, he was looking for a guitar that could pull off the sounds of a Gibson, with the feel of a Stratocaster.

It was of course, made from a Stratocaster body, which Eddie routed out to accommodate a Gibson PAF Humbucker, which came from a Gibson ES355. This pickup was later replaced with a Seymour Duncan. Frankenstein had a maple neck and fret-board.

Together, the neck and body cost him $130, $80 of which was the neck. At first he used the original Fender tremolo, but later added the Floyd Rose. To give the guitar it’s now famous paint job, Eddie painted the guitar black, added masking tape, and then painted it again white. The red was added later when Eddie started to notice too many other black and white guitars (or other two tone combinations) that were coming out at the time. He used Schwinn Red Bicycle paint. Today, there are many replicas of this guitar, some of which Eddie has endorsed and used. 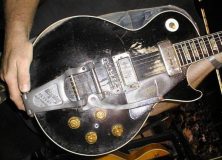 Old Black was originally a 1953 Gibson Les Paul Gold-top. It was painted black before Neil acquired it, however.

It now rocks a bunch of metal hardware, such as the aluminum pickguard and rear electronics cover.

Where is it now? It’s still rockin in the free world, Neil Young still takes it out and plays it on a regular basis. 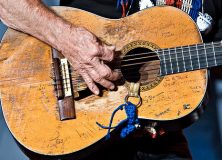 We’ve got a whole article dedicated to Willie Nelson’s worn Martin N-20. This guitar is probably the most road worn guitar in this article.

Willie says it’s a part of him, and things just wouldn’t be the same without it.

Trigger is a 1969 Martin N20. The obvious holes are from Willie using a pick on a guitar that was intended for finger-picking. The N20 was named Trigger after Roy Roger’s horse.

Where is it now? Same place it will always be – very close to Willie Nelson. 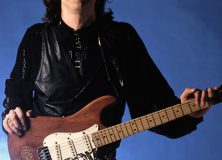 Stevie has two guitars worth mentioning here: Lenny, and Number One.

Pictured to the left here, is Lenny.

Lenny was built somewhere between 1963 and 1965. Stevie fell in love with the Stratocaster when he saw it in a pawn shop when he was 26 years old. Although Stevie was already an phenomenal guitarist at the time, he and his wife Lenora didn’t have the money to purchase the guitar.

Lenora decided to get it for Stevie, so she asked seven friends for $50 each, and they all agreed, so the asking price of $350 was met. The guitar was presented to Stevie at a show, and later that night he wrote the song “Lenny” on it, which he played for Lenora the following morning.

Years later,  Billy Gibbons, from ZZ Top gave him a maple neck for it.

We’re assuming that this guitar is in the possession of Jimmy Vaughan, who is said to have all of Stevie Ray’s guitars and pedals.

Number One is a 1962 / 63 Strat that Stevie used for most of his career. Vaughan purchases it in Austin, Texas. Number One was rebuilt “countless” times.

Here’s another guitar that George Harrison was given by Eric Clapton. Before that, the guitar was owned by Rick Derringer, and John Sebastian.

Later, when Clapton was asked by Harrison to play the lead to “While My Guitar Gently Weeps”, he used this guitar.

Lucy was made in Gibson’s Kalamazoo factory in December of 1957, but she wasn’t originally red – she was a Gold-top. In 1966 Rick Derringer had her refinished, but when he got her back, he said that she felt like a completely different guitar, and he just wasn’t into her anymore, so he sold her to Dan Armstrong’s guitar store in New York.

A few days later, Clapton swooped in and picked Lucy up, and then later gave her to Harrison. In 1973 Lucy was stolen, but was recovered some time later after some negotiations with the person who had inadvertently purchased her as stolen property. But that’s a different story for a different day.

Harrison kept Lucy until his death in 2001.

Keiths iconic Telecaster, Micawber, is a 1953 model. Richards actually picked it up in 1971.

Micawber is always set up for open G tuning, and is normally used on songs like “Honkey Tonk Women”, “Mixed Emotions”, and “Brown Sugar.

Micawber only has 5 strings in use, and only 5 bridge saddles. There’s a Gibson PAF in the neck and the bridge has a stock Fender lap steel pickup, or a 90s nocaster pickup.

The guitar is still in Keith’s possession and enjoys regular use. 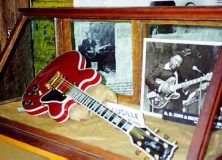 Quite possibly the most famous named guitar is BB King’s Lucille.

By now almost everyone knows the story behind Lucille, so here’s a quick recap.

Back in 1949, King was playing a nightclub, and it caught fire. Everyone rushed outside, but King realized he had left his guitar inside, and went in after it. Of course he made it safely back outside with the guitar, and later he found out that a fight had caused the fire – two men fighting over a girl named Lucille – and two had died in the fire. He named all his guitars Lucille after that, to remind himself never to fight over a woman, and never to do something as dumb as running back into a burning building.

Now there are many Lucilles – in fact, in 1997, King gave Pope John Paul II one of his Lucille guitars.

Where is the original Lucille now? The last time King saw the original was in Brooklyn. It was stolen out of the trunk of his Oldsmobile, not long after the fire, and he states that he would pay $100,000 to get her back. King says that whoever got it probably doesn’t know what they’ve got because his name wasn’t anywhere on it. 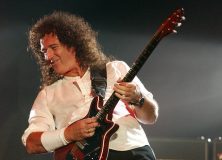 The famous “Red Special” guitar was built by Brian May and his father, Harold in 1963. The majority of the wood came from an 18th century fireplace mantle that a neighbor was throwing away. The guitar has many chambers due to the way Brian and his father put it together.

Brian still has the guitar and it has been “upgraded” and repaired a few times. In 1998 and 2005 it was refinished and had some other cosmetic work done on it, and later the zero fret was replaced. The other frets have not been touched.

Of course Brian still plays this one of a kind classic – but now he has many others that have been replicated by companies such as Guild and Burns. 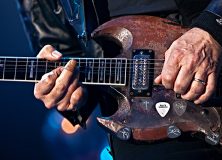 Old Boy is a Jaydee Custom SG. It was built between 1975 and 1978 – suprisingly, John Diggin’s doesnt remember what year exactly that he built it on his kitchen table. He does remember being under some time pressure to get it done, and not having enough time to get many coats of paint on it. This became a factor later when it was left in a hot car, and some of the paint started to bubble up.

This guitar is and was always Tony’s drop D tuned guitar.

Now, it’s still in Tony’s possession, and still gets plenty of air time. 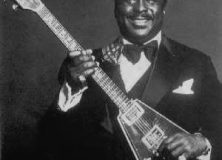 Albert King’s Lucy is a Gibson Flying V that Dan Erlwine built in St. Louis in the late 60’s or early 70’s.

Steven Segall owns three of King’s guitars currently, and one was given to Lee King, who played in Albert’s band.

Tim has been playing guitar & bass since he was 12 years old and has been in Jazz, funk, rock & metal bands. Influences include Jeff Beck, Stanley Clarke, Doug Stegmeyer, Baden Powell, Steve Vai, and pretty much anyone else who has a unique style that expresses their individuality. One of Tim’s many hobbies is building, tweaking, and repairing basses and guitars.
Previous Post
Next Post