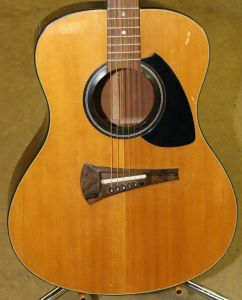 Considering that this guitar was designed by Michael Kasha – who also founded the Institute of Molecular Biophysics at Florida State University – it’s no wonder that the bridge of this vintage Gibson wears a permanent “My dad can beat up your dad” smirk.

Actually, that bridge on the Gibson Mark 35 guitar is “impedance-matching”, designed to resonate differently with each string: starting quite broad on the bass strings and narrowing through the treble strings.

It’s the result of careful research, experimentation, and innovation by Michael Kasha, whose badass scientific guitar designs were then made practical for manufacturing by luthier Michael Schneider.

Michael Kasha had spent about a decade finding ways to scientifically increase bass and treble response in classical acoustic guitars, which boosted both volume and sustain enough to impress Andres Segovia. This quest for better response led Kasha to experiment with new materials and radically creative soundboard bracing systems.

This vintage beauty featured a jumbo mahogany body, a plastic ring around the soundhole, and shoulders a bit more rounded than you’d see in typical Gibson designs.

Kasha and Schneider’s brainchild, the steel string Gibson Mark 35, hit the market in 1976 as part of the Mark series line. Nashville players took to the instrument, loving its booming sound, but the idea never really spread into the bloodstream and Gibson canceled manufacture of the Mark 53 and the rest of the series in 1978, just two years after its inception. Bummer!

But fortunately there are still some Mark series guitars circulating; if you’re lucky you may run into one in a guitar shop. Just look for the distinctively smirking “My dad’s also known for formulating the Kasha rule of fluorescence” bridge.