If you haven’t seen the hit show “Dexter” on Showtime (or Netflix!), I’ll give you a little background.

Dexter is a blood spatter analyst for Miami Metro Homicide, and he’s a bit obsessed with blood.

He also happens to be a sociopath, with a need to kill, which he quenches by only killing other killers.

Dexter ends up being the anti-hero drawing much love and sympathy from the audience.

Since we have to wait a few more months for the next season, I thought it might be fun to feature a few blood covered “killer” guitars.

This guitar turned many heads in the music store where it was featured for being “too vulgar” and was even purchased and then returned later on for the same reason.

Also, when we first featured it, it became one of the most popular guitars on the site for quite some time.

Super realistic blood patterns here, folks – not that I’ve seen this kind of a mess anywhere other than on T.V. however.

Dexter would know exactly how to read the patterns and blood droplets on this guitar and could probably tell the entire story on how it got that way, but since we can’t – we’ll just have to use our imaginations.

All in all, it’s still not a bad guitar – it comes with an alder body, brass bridge, maple neck and Gotoh tuners.

It sings its sad, violent story via a Seymour Duncan SH4 pickup.

That’s clearly a handprint on the upper cutaway right? 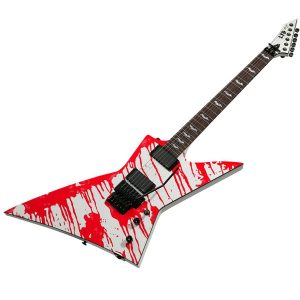 Whereas the Carvel looked like it was an accessory at the murder scene, the DJ-600 looks like it might have just been in the wrong place at the wrong time.

It’s actually a little more Dexter-esque to me for some reason. If you’re a fan of the show, you might know what I mean.

The guitar itself was designed for and by Dan Jacobs, of ATREYU. Under all that blood, it’s not a bad axe.

It’s got a mahogany body with a 3 piece maple neck, and combined with the EMG 81/85 pickup pair, this thing has some killer tone.

It stays in tune with Sperzel locking tuners and an original Floyd Rose bridge.

The Blood Paul was made by Ellie Guitars, in Madison, Wi.

It’s actually not a Les Paul at all, it’s a Roland Synth guitar, but “Blood Paul” certainly paints a cooler picture in your mind than “Blood Roland” would.

Ellie was given the guitar, which was completely stripped down, and he went to town fixing it up, added the Bigsby clone, and some old P90’s and as he says on his blog, a bit of his own blood as well.

The rest of the blood comes from red paint, tinted shellac, and some nitro lacquer.

If you click the image to the left, you will notice that the pickup selector has been labeled very creatively with the neck pickup being “Blood” and the Bridge being “Guts”.

The coolest thing is how the guitar’s sound is described on the blog.

Says Ellie: “It weighs a ton, and screams like a dying pig being eaten by a giant flying vampire bat.”

Who couldn’t — who wouldn’t rock out with a blood stained guitar that sounds like that?