Have you ever woken up one day and thought to yourself, “gee whiz, I sure do wish there were at least one new Jackson Dinky guitar available for me to violently throw my money at in exchange”? You ever have that happen?

Well, it looks like it’s your lucky day. Jackson has unveiled a whopping 6 new Pro Series Dinkies models giving you your pick of the litter. For your convenience we have all the specs listed below so you can consult, deliberate, and ultimately decide which one speaks to you the most.

But enough of that. Onward to the guitars. 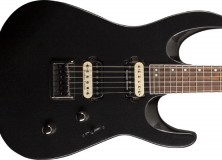 Batter up! First one up to the plate is the DK2HT. This 6-string guitar is built out of alder with a gloss polyester finish gently massaged into it. It’s fitted with a bolt-on maple speed neck with graphite reinforcement and a scarf joint. The neck is finished with a hand-rubbed oil and atop it rests a 24-fret rosewood fretboard.

Installed is a set of direct mount Seymour Duncan humbuckers. A JB Zebra humbucker sits in the bridge position while a 59 Zebra humbucker resides in the neck position. It’s controlled by a 5-way blade pickup selector and master tone and volume knobs.  The DK2HT uses a Jackson HT6 hardtail bridge with Jackson die-cast locking tuners. 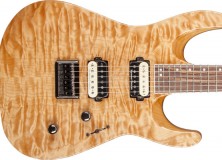 Next up is the DK2QHT. The DK2QHT – another 6-string model – features the same alder body design along with the bolt-on maple speed neck. The graphite reinforcement and scarf joint are also obvious inclusions. The Seymour Duncan JB and 59 Zebra humbuckers, along with the HT6 hardtail bridge and Jackson die-cast locking tuners are also present here.

The big difference is the quilted maple top that adds a new tonal coloration and a flashier aesthetic value. Available in Natural and Transparent Red the DK2QHT holds an MSRP of $1,133.32. 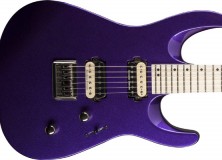 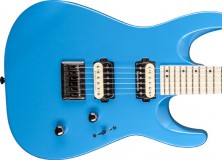 Next in line is the DK2MHT. This model, much like the previous models, is built out of alder. The maple bolt-on speed neck (also featuring the graphite reinforcement and scarf joint) is fitted with a maple fretboard.

The Seymour Duncan JB and 59 Zebra humbuckers are fitted into the bridge and neck slots respectively, along with the HT6 hardtail bridge and die-cast locking tuners make their grandiose return.

Available in Deep Metallic Purple and Blue Glow the DK2MHT holds an MSRP of $1,066.65. 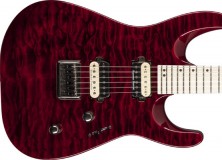 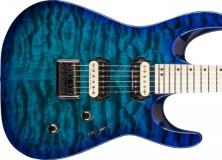 Bolstering the most initials in its model name, the DK2MQHT hits the streets with an alder body decked out with a quilted maple top. It also uses a bolt-on maple speed neck with the graphite reinforcement and scarf joint, and the maple fretboard.

In addition is the set of Seymour Duncan JB and 59 humbuckers with the HT6 hardtail bridge and the die-cast tuners.

The DK2MQHT comes in Chlorine Burst and Transparent Red and holds an MSRP of $1,133.32. 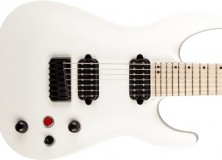 After a slew of 6-string models, Jackson gives us a 7-stringer. The DKA7 is an alder guitar with a matte finish. It includes a bolt-on maple neck with graphite reinforcement and a scarf joint, and a maple fretboard.

The DKA7 uses a set of DiMarzio D Activator 7 active pickups. In the bridge position is a DP720 humbucker while the neck position uses a DP719. Amidst the 3-way toggle switch and the master tone and volume knobs is a momentary kill switch.

All of this is complemented by the HT7 hardtail bridge and the Planet Waves Auto-Trim die-cast locking tuners. 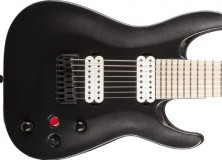 Finally we have the beefiest guitar of them all. The DKA8. This 8-string behemoth is built similarly to the DKA7. It uses an alder body with a gloss polyester finish, a bolt-on maple neck, and a maple fretboard.

The DiMarzio D Activator humbuckers are the same by design, just extended to accompany 8 strings. It uses a DP820 in the bridge position and a DP819 in the neck position. And for good measure the momentary kill switch is included. Finishing it off is the HT8 hardtail bridge and the Planet Waves Auto-Trim die-cast locking tuners.