This Article is Part 5 in The “Handcuffed to The Fretboard” Series.

If you need to catch up on this series:

Bill Evans, in “The Universal Mind of Bill Evans”, warns pianists of the dangers of overplaying–where instead of developing a clear understanding of the music, they rush to imitate, to learn tricks, and to vaguely reflect the sound of more advanced players. And although the quick results might impress a lay person, the overplaying pianist doesn’t actually advance in the most meaningful sense–because he doesn’t mentally understand what his hands are doing. There’s no foundation supporting his playing; it amounts to learned party tricks instead of real substance. It’s a frustrating, creatively stifling condition to be trapped in.

Here’s Bill discussing this in his own words:

So the toughest part of practice is staying mentally clear about exactly what you’re playing, and not being deceived by the fretboard’s many twists and turns.

Almost all guitarists overplay at least some of the time. Overplaying means playing riffs, runs, and cover tunes with your fingers that you don’t intellectually understand. Though skipping ahead to playing advanced things gives fast gratification, over the long run you end up confused and ultimately frustrated because you lack the tools you need to play with the riff, to incorporate it into songs, to create variations on it, and so forth. Instead you’re just stuck repeating those same motions and sounds over and over.

When my fingers know the movements for a melody, but I don’t understand the melody in my mind, my fingers want to just take over. “Nevermind; you don’t have to understand. We got this.”

So my fingers wiggle in these learned patterns. I don’t even need to be mentally present–I can think about what I need at the grocery store while my fingers play mindless scales and exercises all day. 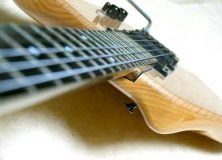 Mindless practice isn’t worth the time–it’s just going through the motions in a meaningless way. Brainlessly playing memorized patterns won’t actually improve my playing at all. The things that really improve my playing involve connecting these patterns to the act of actually making music. That means not just playing a scale, but understanding how to use the notes in that scale to make music. This means not just memorizing chord forms, but understanding every note in each chord and knowing exactly why it’s there.

With that in mind, I’ve come up with six techniques that’ve really helped me to slow down and get the most bang out of every minute that I spend practicing.

1. Writing melodies and chords as sheet music, on chord diagrams, etc. This makes you conscious of every note as you draw them on the staff one at a time.

2. Mentally listing the function of every note of any given arpeggio, scale, or melody as you practice. 1, b3, 5, b7, etc.

3. Watching your fretting hand and mentally identifying the intervals from each note to the next. “Up a minor third, down a minor second, up a perfect fifth…” etc. This is slow going at first, but just like your hands, your mind gets much quicker with practice.

4. Spending some time away from the guitar to study music theory concepts. I find it’s healthy to bypass the fingers entirely now and then to learn some new things entirely with my head. A true musician’s mind is more valuable than her fingers. And because the piano is such an easy way to visualize music theory concepts, you could do worse than dusting off any keyboard you might have lying around.

5. Visualizing the guitar fretboard and the shapes of certain scales, riffs, etc. when you’re away from the guitar. This is akin to slowly building a guitar in your own mind over time, fret by fret.

6. Singing every note of everything you play. You can do this while you carry out any of the other techniques listed above. When practicing arpeggios and playing melodies, after playing them through a few times I start trying to sing each note before I pluck it. This helps imprint the notes not just in my fingers, but also etches them into my mind.

Given enough time and effort, your understanding will take root deeper and deeper, and you’ll think much faster–so in the end, you can play fast while still knowing exactly what you’re doing. Until then, though, go slowly; be patient; breathe deeply. Expect the learning process to take a while.

The end result is that, through humbling yourself and paying attention to developing your musical mind, you’ll be able to reach ever-higher levels. You’ll gradually wear down every barrier between your mind and your instrument until you’re truly using the instrument to express yourself, rather than just performing little finger gymnastic routines.

Overplaying is momentarily fun, but you can’t build on that confusion to become a truly great guitarist. When you get a taste of the satisfaction of true musical understanding, you start really being able to express yourself instead of just stumbling around on your own fretboard like a drunken vagrant. That payoff of authentic mastery is worth every bead of sweat, man. It really is.