A Little About The Producer From 65 Amps 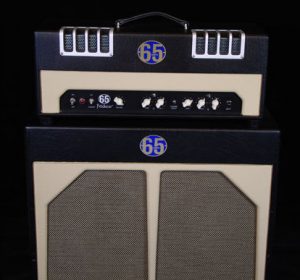 Yes. Yes, Jameson, they do look cool as fuck. As the NAMMadness continues after the event itself we now find ourselves face to face with 65amps and their newest model, the Producer.

The Producer is a 28-watt tube amp that boasts its innovative electrical engineering as the means to set it apart from any other amp. To fully appreciate the Producer one must turn back the clocks and look at how old amps were designed back when tube amps had a monopoly on the industry. The ciruitry then was designed to push the tubes of the same era harder with higher voltage.

Modern tubes are designed a bit differently and with modern amps replicating the same circuitry to push the same voltage can diminish the lifespan of the tubes. By their powers combined 65amps and Mercury Magnetics have developed a new transformer that helps push modern tubes to get warm, vintage tones without killing them all the while. With that the amp’s primary advantage (beyond the good tone, of course) is that it reduces frequency of tube replacements, biasing, and maintenance.

As for how the circuitry affects other aspects. It’s able to attain a good, clean signal and combined with 65amps’ Master Voltage circuit it’s able to keep the clean sounds and the desired distorted sound without causing your ears to bleed from the volume hitting that “too damn loud” level.

Now For The Specs. Forward March.

We’ve assessed that the Producer is capable of 28 watts and has a unique transistor. The amp comes stock with a pair of EL34 tubes for power and a 12AX7 for preamp. On the front it has the predictable on/off switch, an on/standby switch, the aforementioned Master Voltage control, tone control, and EQ controls for bass and treble.

The Producer also features two separate channels accompanied by the necessary onboard channel switch as well as two independent 65amps’ Bump switches. Taking a bit of a side step from the specs, if you’re not sure what the Bump switches do they act as a bit of a gain boost and introduce more more natural mids while keeping any unwanted buzzing at bay. All of these can be controlled by a simple 2-button foot switch that comes packed with the amp. 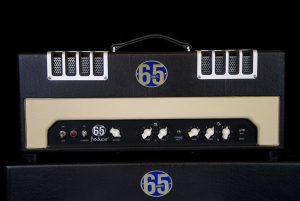 Now for the modest establishment of features upon the backside of the Producer. The footswitch input jack lurks around the back along with two speaker outputs and a switch for 8 ohms and 16 ohms impedence. The weight of the head alone comes in at 26.4 pounds with the dimensions of 25″ x 9″ by 11″.

But wait. There’s more. If you order today you’ll get exactly what you order. Don’t wait until tomorrow because they’re going, going, gone. You may want to throw a cabinet in there while you’re at it. The Producer is just a head, so if you don’t have speakers you’ll have to imagine you’re rocking out. Then you’ll be bringing yourself down to my level.