At the bottom of this article, you’ll find more links to other “less conventional” guitar practice / composition approaches. 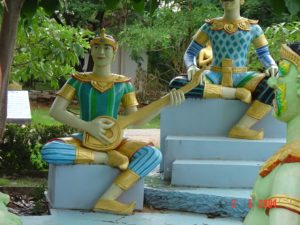 We practice. We play live. We record. Sometimes we churn through these activities like we’re digging a hole – each shovel full of dirt blending right into the next until we can’t really differentiate one from the next in our memory.

Well, that was pretty grim, wasn’t it? I’m not saying we don’t enjoy every minute of it – but more that we’re not entirely present while we’re doing these things – sometimes an activity gets to be more of a rote task rather than a moment of guitar enjoyment – and the enlightenment gets lost in the process.

So – to be “enlightened” on the guitar … what does that mean?

It means to have a full appreciation for every moment, every note, and also to have a full understanding of the instrument itself and what it does for you, and how you interact with it.

If you have these things – or what I’m calling guitar “enlightenment” you’ll find pockets of creativity and focus you didn’t know you had.

In my mind, all of these things are ways of rewiring your brain to think about the guitar in new, unusual, and more intense, or basic ways. This rewiring will cause you to have new ideas while songwriting, recording, or playing live. Just don’t freak out your band.

You’ll probably find that you’re already doing some of these things, with varying levels of consciousness. The whole point here is to do these things with extreme consciousness – or mindfulness, and pay attention to the results.

With that in mind, and in no particular order, here are 9 Steps To Guitar Enlightenment

1. Forget (at least temporarily) about any financial or popularity based success goals.

Think about the guitar as an instrument – a beautiful creation, and an outlet for whatever you’ve got inside. Let it be a tool for expression as much as it is a tool for (or path to) any kind of success.

2. Become closer to your guitar(s)

Pick a guitar – probably one that you’re most likely to record with, or play out with, and just spend some time becoming familiar with how it fits in your hands, and how it responds to various techniques that are common to your playing style. Billy Sheehan says this is very important to him on bass – and guitar is no different. Without using his eyes, he knows where every fret is, where every knob is, and how the instrument will react to whatever he does to it. Know it like a lover – we know you love it.

3. Play with others, and actually notice them

When playing with others, it’s pretty common for most of your attention to be on yourself, and what you’re playing – after all, that’s your job. But when you do play with others, listen from the outside, and try to hear the whole thing. What sonic real estate is your guitar occupying? What rhythmic slots are you filling? Finding and knowing your place in a band, or in a song will change how you play, and the next time you sit down to write a guitar part, you’ll find you’ve got a lot more valuable knowledge to work from – and you didn’t get it from more experience, you got it from paying better attention during the same experiences you’ve always had.

This goes along with #3, but it warrants it’s own step because there is a lot more to listening than just being present when you’re playing with other people. In fact, many of the steps in this list involve different forms of listening – its as important as playing.

Listen carefully to the masters, whoever inspires you. Listen to your bandmates. Listen to your amp, any pedals you add to your chain, and listen from different positions around your amp.

Know all the sounds very well – practice the art of listening.

5. Identify what turns you on and why

I guess it’s pretty obvious – and you know what kinds of music make you happy, but have you ever deconstructed the songs, or sounds, or tones you love, and tried to figure out why you love them, or what in particular you love about them?

What is it about Zakk Wylde’s zealous use of chorus on No Rest For The Wicked that makes it appealing to you? Are there really elements of Yngwie Malmsteen’s music that you also like in traditional classical music? Why do you enjoy the music so many different kinds of artists that don’t really have much in common?

Know why you like what you like. Deconstruct any music that makes you happy. It’ll help you write more music you’ll love.

How much of your sound is created by the guitar’s vibrations, and how much of it is your effects chain and amplification?

Spend some time with the natural sound of your guitar, playing the same stuff you play while amplified.

When you’re more familiar with the sound’s origination, you’ll know better what to do with it once it’s amplified. You might even decide you’ve got too many effects – oops.

7. Create tunes in your head – without a guitar in your hands.

This helps you to eliminate any habits you’ve got that are motor based – places your hands might go automatically when writing a song, or a solo. Try humming out that solo instead of actually playing it. Then go back to the guitar and learn what you’ve hummed.

This will provide you with a tune or melody that is much more from the heart than something your fingers picked out from their comfort zone.

8. Play scales very slowly, not to learn to play them faster, or to memorize them, but to hear them.

See, we’re back to listening again. I warned you this would come up again.

Certain scales magically work over certain progressions, and we all know that. We can learn which scales work with which chord progressions the best and it just kind of works.

But the task here is to stop and learn why – and not from a technical perspective. Learn why a scale sounds the way it does, or even why it feels the way it does. This prevents you from doing the same thing over and over. It also shifts your focus from “notes that go together” to notes that relate to each other in a certain way, or create a certain vibe or feeling.

Play it slowly and listen to the intervals, and the relationship they have with each other – individually, note to note, and the scale as a whole. What elements of the scale sound calmer – or more dramatic? What notes are asking a question that the next note is answering? Which notes are antagonistic to the notes after them, or before them? Which ones are getting along?

This establishes an intimate feel for the scale, which probably wont be something you can explain or put into words for someone else, but the next time you need that drama, or that antagonistic or beneficial relationship, you’ll know which notes / scales to pull out.

9. Listen for the relationships between the notes in chords or arpeggios

This is basically the same thing as #8, but instead of being mindful of a scale, its a chord. Play the chord slowly – as an arpeggio, then strum it. Figure out why this combination of notes makes the chord sound the way it does.

By the way, why does that chord sound the way it does?

Try noticing the difference between a chord strummed, and a chord played note by note. For an easy starter, try a power chord. Why does it sound powerful?

If you don’t hear anything in step 8 or 9, keep doing it. And by that I mean keep playing the same scale or chord over and over until something happens. It might take awhile, and you probably wont open any portals into alternate universes, and it might happen after you’re sick as hell of that chord or scale, but something will surface, as long as your paying attention to the relationships (intervals) between the notes.

That something will surface most likely as a feeling between two or more of the notes. Give the feeling a name (drama, peace, antagonistic, etc.), and remember it. Some scales may tell a mini story. They may have a conflict / resolution story, or a question / answer story.

It’s kind of like meditating on a scale, or chord. After all, this is enlightenment, why not meditate?