A Good Case For Becoming Literate 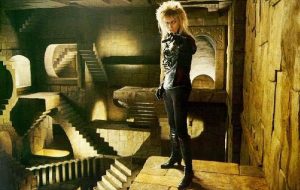 I should’ve taken up piano instead of guitar.

I can get my head around that.

To play a note that’s one half step higher than the one you’re playing now, you can advance one fret closer to the bridge–or you can move one string toward the floor and four frets backward, or you can move one string toward the ceiling and six frets forward… need I go on? Even if you know exactly which note you want to play next, you’ve got half a dozen choices for locating that note.

I believe that learning the basics of music theory is the one hope a guitarist has for making real, lucid sense out of this mess. The music staff, like the piano, makes logical sense: low-pitched notes are low on the staff; high-pitched notes are high. It’s much faster and easier to make intelligent experiments by thinking on a staff than it is to think
on a fretboard directly.

As you know if you’ve been playing guitar for any length of time, the fret-board eventually becomes a kind of prison. Memorizing which notes fall where on the fretboard is a bit of a chore, I’ll admit; it’s much more fun to learn a song and play it ten or twenty times in an afternoon. It’s more fun to play licks and riffs you’ve played a thousand times before–the ones that’re reliable. Safe.

But over time, you get stale. It gets boring, and it gets discouraging, but your fingers keep running through them brainlessly because you don’t know what else to do. When you experiment to try and find new horizons, you just kind of grope aimlessly around the fretboard–but middle C is in five places. The chromatic scale of music is round, just like the Earth itself. As the adage goes: “Travel far enough in one direction, and you’ll be on your way back home.” Advance five frets toward the bridge, and you’ve gone someplace new… but if you advance twelve frets toward the bridge, you’re on the same note you set out to escape from to begin with.

So I implore you to set yourself free by learning the fretboard and learning a bit of music theory. You and I play a strange, wonderful, counter-intuitive instrument. It really is like a labyrinth. And if you dive into the labyrinth without a map or a plan of any kind, you can’t blame me if you get lost and can’t seem to escape your own redundant riffs and licks.