A Homage to Jason Becker 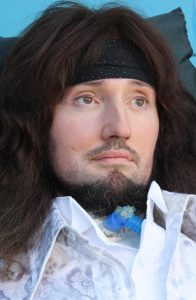 Most people I know already know who Jason Becker is. That being said, I do still come across people that at best know only a little about him. When I reflected on that fact I felt it had become my civic duty to ensure that people learn about and/or are reminded of possibly guitar history’s greatest story of success, perseverance, and what the love for the guitar can drive a man to accomplish.

With that I give you a big salute to Jason Becker

The Legacy of Jason Becker

Of course when it comes to paying homage to anything there is an obligatory history section where we all reflect on the events that started everything that we have come to know these days. Typically this part comes in about where we’re at right now, so game on.

Jason Becker, born in 1969, practically played guitar from birth given his musical upbringing. When he hit the age 16, the age most people are allowed to get their driver’s license (at least where I’m from) he formed Cacophony with fellow guitarist whom he had befriended Marty Friedman. Just as Cacophony was winding down Becker would then go on to replace Steve Vai as David Lee Roth’s guitarist.

And then the infamous plot twist surfaced.

During the recording of the then David Lee Roth album he had noticed some of his muscles had grown lackadaisical and finishing the recording had become an ever expanding challenge. Wasn’t long before he was diagnosed with Amyotrophic Lateral Sclerosis (ALS or Lou Gehrig’s Disease) and at 20 years old he was given about three years to live.

Of course Becker didn’t just ball up and come to terms with what mere doctors told him. He said screw that and and lived for more than another 20 years. To put that in perspective you could count his remaining time on one hand and you’d still have digits left over. Now if you wanted to count the years he’s survived you’d have to take off your shoes and socks and you’d need to borrow a couple of digits from a friend.

Over 50% of Jason Becker’s life has been affected by ALS and the first thing he did after his diagnosis was write and record another album. Perspective was released in 1995, just after he was originally expected to have expired.

Just a couple of years after that he became permanently paralyzed and he still pushed forward. Since then he has released three more solo albums and the tribute DVD Jason Becker: Not Dead Yet was released and did basically what I’m doing here, only better (I don’t expect many awards from this).

Still he writes and enjoys music using a custom setup to control a mouse cursor with his eye and a click with his mouth to write the music he hears in his head and there’s no doubt that has helped him defy odds six times over. All I can say is “hats off, Mr. Becker. You are a greater man than I.”

While I’m not a neurologist by any means I do have a personal fascination with various disabilities and diseases and how people react to them. This is a slight deviation from attention on Becker himself, I wanted to be able to put into perspective to at least some degree what people go through when developing the disease. It’s one thing to pop on Wikipedia and read “Jason Becker has ALS”, but the weight of what that means is lost.

Without treading the line beyond my intellectual jurisdiction the general opinion from people developing ALS is that possibly the hardest thing to adapt to is admitting when you can’t do something anymore. When the simplest of things is suddenly outright not doable anymore.*

For example. How often does one person, while eating dinner, look at the fork in their hand and even consider the possibility of not being able to hold said fork? I know I didn’t and I just finished eating before writing this.

But having said that the people still demonstrated the strength to keep living their lives as best they could.

For a person like Jason Becker to have accomplished what he has is unbelievable. It’s the stuff of legends. You can’t even put into words just how incredible it is. It’s all the inspiration for anyone to know that no matter what we can still do whatever we want.

*My resources were as many YouTube video interviews with diagnosed people as I could find.