A Lesson On Getting Out With Twelve-Tone Patterns

A quick and dirty recipe for generating 12-tone sounds with ingredients you already have at home.

In my latest book, The GuitArchitect’s Guide To Symmetrical Twelve-Tone Patterns, I explore ways to introduce outside sounds in your playing.  Below is a sample lesson from the book, but before I get into the details let’s cover a few basics (with the caveat that anything presented here is a rough guide to a topic that could cover thousands of pages).

In its simplest definition, twelve-tone music refers to a compositional style that uses all notes in a chromatic scale in a systematic way.

Why is it cool?

While composers have been hip to twelve-tone applications for a while, the source material for that music (the twelve-tone row) is unwieldy for improvisational purposes.

What’s cool about the application?  By using all twelve tones in patterns, you’ll create melodic ideas that weave in and out of various tonalities, which will spice up your playing.

While my book covers a number of twelve-tone patterns that use symmetrical intervals (whole tone scale, augmented chord, diminished chord and the tritone interval) I also explore other methods, including the one below, which generates a twelve-tone line from a specific chord type.

Getting to all twelve tones with a minor arpeggio

This idea will work with any chord, but this example uses a minor 7 arpeggio, played on two strings.

I’ll start with a descending chromatic scale as it has all twelve of the notes I’ll be using: 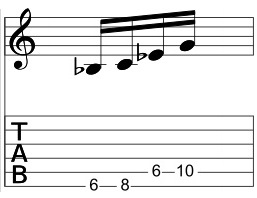 Removing those notes from the chromatic scale leaves the following:

Since the initial chord doesn’t contain a tritone, I’ll look for any tritone-based chord shapes from the remaining notes.  In this case the easiest voicing to see is a F# minor 7 (F# (Gb), A, C# (Db), E).

(You could also call this a Gb minor 7, but that would require thinking of A as Bbb, which isn’t intuitive for most players.  Working in this area requires enharmonic flexibility.  In general, my advice is to keep the analysis simple and use the first voicing that makes sense to you!) 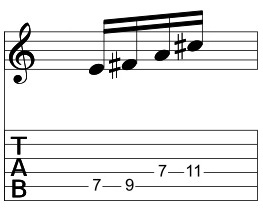 Removing both arpeggios from the chromatic scale leaves the following notes: 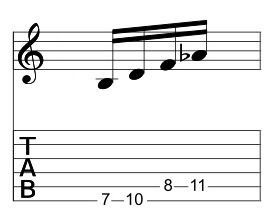 While this lick is firmly rooted in C minor as a tonality, it weaves in and out of the tonality as it goes through the rest of the pattern. In other words, it’s a controlled way to go “outside” an existing tonality. 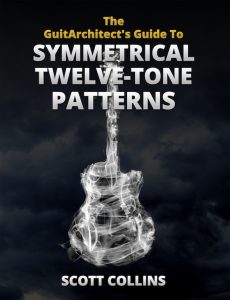 Since this idea can be applied to any arpeggio, I hope you’ll be inspired to create new licks and ideas.

The GuitArchitect’s Guide To Symmetrical Twelve-Tone Patterns goes deeper into this area and will teach you new, creative and unexpected ways to approach soloing, riffing and songwriting.

Part of that effect is the combination of arpeggios but part of it is the phrasing. Having the 4-note figure played as sextuplets pushes the second four notes off the down beat. It creates a 2-bar phrase where 1/2 the phrase is trying to rhythmically resolve to the beat. I have a 2-string major 7th example in the book that has a similar effect.

I love the way the riff sounds like it’s “unraveling” as it goes. Spiraling outward into all twelve tones sounds like chaos ripping apart the fabric of a melody to me. I love that sound, man.