Are you recording a guitar amp for the first time or just looking for some guidance in the process? This article will give you a general overview of what’s involved when recording guitar amps and help you start recording some killer guitar tracks. 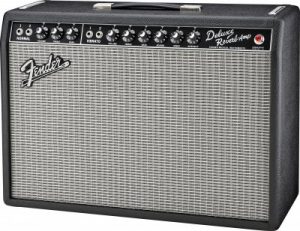 Before you even bother grabbing a microphone, set up your guitar amp to get the sound you’re looking for. I know you’re eager to get recording, but this is the most important step. Don’t be afraid to spend some time on it. If your amp sounds awesome when you’re sitting in front of it, it will sound awesome on the recording.

On the other hand, if your amp sounds crappy, well guess what – that microphone of yours isn’t a magic wand that will turn your guitar tone into something wonderful. If you don’t put the time into getting a good sound right off the bat, you’ll likely end up wasting a lot of time later trying to fix it with EQ. Even after all that effort, you still may not have the guitar sound you want.

Gear maintenance factors into getting a great sound too. A tube amp that has gone too long with the same old tubes may not perform very well. Be sure to perform regular maintenance on your tube amp to get the best possible sound.

There’s a lot to know about microphones, but most of that technical talk is beyond the scope of this article. What we will do here is simply talk about some of the more popular microphones used for recording guitar. Keep in mind this is not a complete list, so feel free to try any microphone you may already own.

Dynamic cardiods like the Shure SM57, Electro-Voice RE20 and the Sennheiser MD-421 are classic choices for recording guitar. They’re rugged and can handle the high SPLs of a roaring guitar amp. They have frequency responses that work well for the electric guitar which combat proximity effect and boost mid frequencies. Their cardiod pick up patterns are also great for getting pretty good isolation from the room or other instruments.

Of the three, the SM57 is probably the best choice for a home recordist since it’s fairly inexpensive. It’s a great go to mic for many different purposes and I have to say I’m usually happy with the results I get with a 57 on a guitar amp.

If you’d like to try a different flavor, some mics similar in price point and function to the SM57 are the Audix i5, the Sennheiser e609 and e906.

Directional condenser microphones have been know to be used on guitar amps too for their different sonic characteristics. Feel free to experiment with whatever condenser mics you may have available. Some classic models are the Nueman U87, AKG 414, AKG C3000, and the Shure KSM137. Remember that these condenser mics will need phantom power.

For a generally smoother, warmer sound you could try a ribbon microphone like the Royer R-121. In general, ribbons are quite pricey. Some can’t handle high SPLs either so be careful (although Royer says the 121 can handle 135dB no problem). Also keep in mind most ribbons are figure 8 polar patterns so they’re going to capture more of the room.

After you’ve chosen your microphone you must then figure out where to put it. The simplest philosophy to have in this process is to put the microphone where ever the amp sounds the best. Makes sense, right? To figure that out you’ll have to do a fair amount of moving around and listening. Use your ears. The microphone will hear what you hear.

Close mic’ing a guitar amp involves placing a microphone very near the speaker (within an inch or so). Pointing the mic at different areas of the speaker will give you different sounds, with the dust cap (center) being the brightest and the outside of the cone being the darkest. Experiment and try to find the speaker’s sweet spot.

If the amp you’re using has more than one speaker, you’ll want to do some listening and put a mic on the best sounding one. But you don’t have to choose. Feel free to mic up multiple speakers and experiment with blending them together. You can even mix and match combinations of on-axis and off-axis mic’ing. If you’re amp cabinet only has one speaker, there’s no rule that says you can’t use two or more microphones. Experiment!

Distant mic’ing of a guitar amp involves, as you might expect, placing microphones at a distance from the amp. The distance is really subjective. It could be six inches from the amp, 3 feet away or clear on the other side of the room. It’s all about what you’re going for. Mic’ing an amp from a distance is a better way to capture the sound of the cabinet as a whole, as opposed to just a speaker. Obviously the more you pull the mic back, the more natural room reverb you will get on the recording too.

It’s very common to blend both distant and close mic’ing techniques together, so let your imagination run wild. But if you do, keep in mind that combining mics of different distances will likely produce phasing. This may or may not be good. Abiding by the rule of thumb that the phase of a sound wave is the same about every 3 feet (depending on room temperature) should minimize the effects of phasing.

Lastly I want to emphasize how important it is to keep your guitar in tune. This may seem like a no brainer but as an engineer, I can’t tell you how many times I’ve had to be the one to tell the guitar player he’s out of tune. Don’t go on recording for an hour with out checking your guitar’s tuning. There are few things more heartbreaking than capturing that perfect take only to realize later that you’re out of tune with the rest of the tracks. Personally, I try to check my tuning about every 10 minutes (sometimes less) even if I haven’t noticed my guitar go out. If you’re recording yourself, you have to be vigilant and pay attention to this detail. Of course, making sure your guitar is properly set up and well intoned is also a tremendous help.