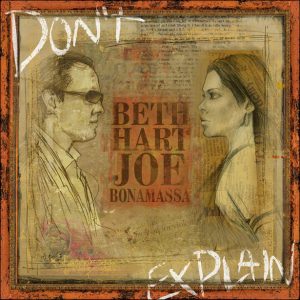 Blues-rock belter extraordinaire Beth Hart and the Encyclopedia Britannica of the blues lick Joe Bonamassa, have joined together to create an album of dark and gritty soul drenched covers. Don’t Explain is a well selected mix of great tunes that plays to the strengths of Hart’s depth charged vocalizations, while giving Bonamassa the opportunity to shine with subtlety and nuance within a slightly different musical landscape.

Interestingly enough it’s the kind of record that could be equally enjoyed by the guitar freak in you, as well as your wife or girlfriend. It’s all about the song though, and its Hart’s singing and choice of material that makes this record really pop. Bonamassa’s playing is perfection as usual, displaying his impeccable signature touch, taste, feel, and fire – while Hart sings her ass off with such deep soul searing emotion, you’ll instantly recall the first time your heart was broken. Her tortured, heartfelt, Janis Joplin meets Billie Holiday via Etta James vocal recipe (with a sensual, smokey blues rasp), compels you to come to her rescue, and hold her in your arms.

Hart tackles the greats but never competes against them.

She makes the songs her own while the band and producer Kevin Shirley (Led Zeppelin, Black Crowes, Black Country Communion), serves each tune with an earthy but lush production atmosphere and tight arrangements. Highlights include “Don’t Explain” by Billie Holiday, “Chocolate Jesus” by Tom Waits, “I’d Rather Go Blind” made famous by Etta James, “For My Friend” by Bill Withers, and “Sinner’s Prayer” by Ray Charles.

Bonamassa rocks out with flawless tone and articulation during the solo section to “For My Friends,” and shows his musical maturity and “Less Is More” approach on the reverb drenched “Chocolate Jesus.” He whips out the double-stopped country licks on “Something’s Got A Hold On Me,” and duets vocally with Hart on the toe tapping gospel-country number “Well, Well” to excellent effect. His sultry and opulent pitch perfect slide work makes an appearance on the final cut, the Aretha Franklin classic, “Ain’t No Way.”

Hart and Bonamassa are surrounded by a stellar band that includes Blondie Chaplin on guitar, Carmine Rojas on bass, Anton Fig on drums, and Arlan Scheirbaum on keys. They recorded the record live in the studio and it feels like it. It’s the sound of a talented group of musicians playing together, and playing off one another.

Loyal Beth Hart fans already know what she’s capable of, but Don’t Explain is the record that will hopefully bring her greater recognition and a wider fan base. After hearing this record, the uninitiated will say, “How come I’ve never heard of Beth Hart?” Her gifts are undeniable and after a listen or two, I think you will agree that Don’t Explain is a fine record, and Beth Hart is a super-talented lady.