Album Review: Chris Brooks – The Axis Of All Things

Chris Brooks – The Axis Of All Things 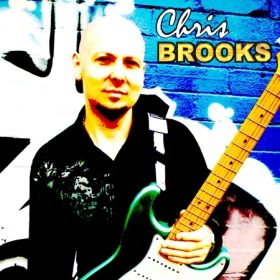 So the other day Jameson slapped Australian guitarist Chris Brooks’ album The Axis of All Things on my desk and said “review this or burn,” so on my way I went, and listened to it – and the first thing I heard was “this is a review copy. Please do not redistribute.” Artistic expression has never sounded so specific. Bad sense of humor aside The Axis of All Things is easily exactly what it strives to be which is a great progressive rock/metal album for guitar enthusiasts. While I think it can be summed up easily like that I don’t think it to be an album so easy to overlook.

The songs and song writing

The Axis of All Things is first and foremost a high energy rock/metal album and while Brooks does dip in and out of various genres and styles he doesn’t really make the commitment to them compared to the progressive style that dominates the album as a whole; And while the album is heavy on technicality and complexity Brooks does well to showcase a good sense of taste all the while.

A good sense of taste is probably the most important thing to bring up because it’s what gives an album like The Axis of All Things purpose instead of being merely a statement of how over the top a guy can get. Melody is ever present in throughout each song, and sometimes delightfully counter-punctual, so the album never really feels like it’s stopped saying something just to show off.

Most of the songs, as I’d insinuated above, have quite a bit of pep in their step, so to speak. Only two exceptions would be the modest Wisdom Road, the dynamically intense Prelude (which is a Chris Brooks rendition of Marc-Antoine’s Charpentier Te Deum) and the cover of Kee Marcello’s Hammer’s Heart, which after much going back and forth between the original and the cover I can honestly say I prefer Brooks’ version at the very least because of his technique.

Chris Brooks’ technique is stupidly precise and probably where a lot of his influences show through in his playing. No single melody has gone through without obvious consideration as to how it should be played and by extension the album is glazed with enough phrasing to keep the listening experience interesting well beyond the first listen. As I had commented on any given song I thought that if there was anything that showed his influences through it was mostly in his technique. I seldom thought that simply his melody alone or his harmonies alone showed his influences compared to how often I heard how he played something and made the connection myself where I’d heard such specific uses of slides, legato, or what have you.

In short the mix is as clean and clear as you could hope. The drums sit comfortably and are easy to hear, but not over bearing. The bass does what it needs to do and it’s a pleasure to hear and is performed very well, though its heavy on the lows and as any song gets going it gets overshadowed easily. Often you’ll hear multiple guitar tracks at once, though they’re usually distinctly rhythm and lead guitars and are mixed accordingly. Every so often there will be a couple of more melodic leads at once that aren’t necessarily just harmonized and they’re mixed well enough that they never fight for dominance.

Chris Brooks’ The Axis of All Things is an incredible album with a greater attention to detail that could rival my family of accountants and engineers. His performance as well as the drummers – Peter McDonaugh and Gordon Rytmeister, and bassist Nate Apparati are all as spot on as anyone could expect. The Axis of All Things is a strong and energetic album by a guitarist for guitarists and anyone that looks for any such thing would likely be a bonehead to pass it up without at least listening to it.