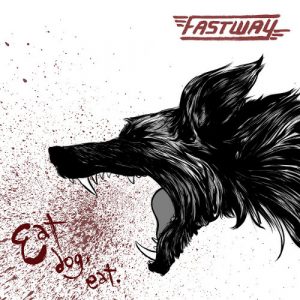 Originally formed in 1983, their self-titled debut album did great business with guitar heavy tunes such as “Easy Livin’,” and “Say What You Will.” In 1986 the group appeared on the Trick Or Treat soundtrack establishing the band as a musical force in hard rock and metal.

Though the band’s line-up has been inconsistent throughout their seven-album discography, Fast Eddie Clarke has been a mainstay and continues to be Fastway’s visionary leader and linchpin to it’s unique sound. For Clarke it’s about huge fat-free riffs, blues based soloing, and a nasty guitar sound. After all these years Clarke continues stick to the style of gutsy guitar playing that brought him to prominence with Motorhead, and later Fastway. Its old school heavy British blues-rock with Marshalls vibrating.

“Deliver Me,” “Fade Out,” and Leave The Light On” start things rolling with majestic Led Zeppelin style riffage, moody bass lines, dynamic breakdowns, and raunchy chordal riffs. It’s everything you’ve heard before – familiar and catchy, without being 100% lame. These guys never left the late 70’s and early 80’s musically, but that’s ok.

The production is honest and clear, and the performances are tight and inspired. Jepson sings like he really means it and the rhythm section grooves appropriately. Eat Dog, Eat has a heavy rock simplicity owing a lot to the AC/DC school of bass and drum interplay, but Clarke’s guitar is the star attraction, lifting the band above pure cloneism.

With the songs “Loving Fool,” Dead And Gone,” and “Sick as a Dog,” we turn a corner that takes us back to classic Fastway. It’s British head banging hard rock with the kind of riffs that compel you to stomp. Screaming double-stop bends bleed into pedal tone chord riffs and concise blues-rock soloing. It’s well thought out, yet never sacrifices burn. Clarke offsets that heat by picking up an acoustic guitar on the ballad “Dead And Gone,” then grabs the Les Paul again during the heavy duty half time shuffle section for some inspired soloing. Clarke is in his element giving a master class in metal meets blues-rock soloing with soul and melody.

He also cuts loose on “Freedom Song” and “Love I Need.” On “Who Do You Believe” Fast Eddie conjures up some mind bending psychedelic guitar. The team of Clarke and Jepson has done a first-rate job re-shuffling a hand full of tried and true tropes of late 70’s and early 80’s hard rock. They also add a pinch of early 90’s moody sounding grunge for varieties sake. It’s enjoyably recognizable. Jepson is a solid heavy rock vocalist and his production skills cook.