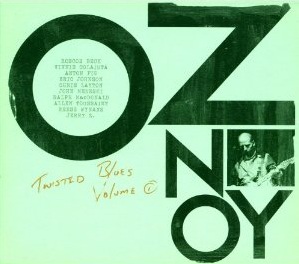 Blues music is like a city with many neighborhoods, and guitarist Oz Noy has concocted a blues record incorporating the less traditional facets of the genre, and his own artistic sensibility.

Single coil strat tones permeate the record along with Noy’s deft use of effects including Octavia, Univibe, Leslie, and Wah, all used with excellent tastemanship, and never to the point of overkill. Twisted Blues Volume 1 burns straight out of the gate with the title track, and a rhythm section consisting of drummer Vinnie Colaiuta, bassist Will Lee, and Jerry Z. and John Medeski on organ. Noy is the Mayor of Chop City wielding sublime phrasing that weaves inside and outside, but never without soul.

Noy is a big fan of Thelonius Monk and nicely interprets the tunes “Light Blue” and “Trinkle Tinkle.” The former has a soundscape-ish, drug induced, dreamy quality, that Noy makes all his own, while the latter composition gives him the chance to bust out the Octavia and go ballistically freak-out on the solos. Imagine if SRV moved to New York and started hanging out with Kurt Rosenwinkle.

“Steroids” starts off with a “Couldn’t Stand The Weather” vibe then goes all funk crazy bonkers, as only top tier musicians Will Lee and Vinnie Colaiuta can do. When Noy funks, he funks hard, and the soloing on “Steroids” is that funky, New York fusion, hip, intervallic thing, where technique is a non-issue. He’s nailing the changes, yet soars effortlessly with the kind of harmonic telepathy all guitarists aspire to.

“Two Centers” runs in a similar vein in terms of effortless mastery, yet turns in the opposite direction with it’s slow cooked, Univibe soaked, Hendrixy blues flourishes. It’s his adroit use of harmonic movement that takes it out of the realm of generic blues copycat stuff. Noy is a jazz guy, but the blues gives it soul.

Twisted Blues Volume 1 is another great recording in the Oz Noy discography. His playing is varied from fiery to sultry, and everything in between. His compositional tools are sophisticated yet earthy, while his playing is firmly rooted in the soulful without ever being trite. And boy is he funky! He’s got great ideas, which is going to make it difficult to wait around for Twisted Blues Volume 2.