Album Review: Squackett – A Life Within A Day

Squackett – A Life Within A Day 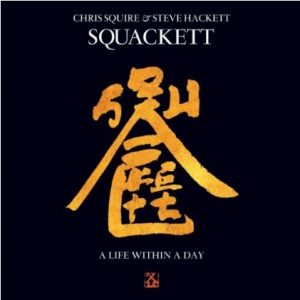 Squackett is project album pairing progressive rock veterans Chris Squire bassist for Yes, and former Genesis guitarist Steve Hackett. It’s an album four years in the making and came about when each of them required the services of the other for their solo projects. The music evolved over time and Squackett was born. They got some help from Roger King on keyboards, Amanda Lehmann on vocals, and Jeremy Stacey on drums.

A Life Within A Day has musical elements you might expect. There’s 70’s era Genesis, a little Yes, but there’s more. There’s a taste of Brit pop ala XTC as well as a little prog-pop from Hackett’s side project GTR. Though the level of musicianship is high, it’s very much a vocal album with tight harmonies and lush arrangements. It’s a dreamy, soothing, and accessible prog record with silky production. It also features excellent playing and gorgeous guitar tones.

The title track morphs into a groove reminiscent of Led Zeppelin’s “Kashmir,” but soars to other places with Squire and Hackett’s ethereal vocals, inspired cliché free guitar playing, and a rockin’ double time bridge section bringing to mind Yes’s “Roundabout.” It’s epic without being bombastic, and the lyrics are evocatively trippy.

“Tall Ships” has a laid-back bass groove with lots of sustaining guitar lines, and a heavenly choir singing the chorus. “Divided Self” starts off with classic Brit pop Rickenbacker 12 sting parts via Beatles/XTC then goes all proggy with some ominous vocal manipulation and a classical interlude. This track really jumps out from the others and displays Hackett’s range as a songwriter.

“Aliens” is acoustic material ala “I’ve Seen All Good People,” but with “Starship Trooper” style lyrics. Squire and Hackett have created their own genre of music – Smooth Prog. It’s musically challenging, meticulously arranged, takes you on a mental voyage, but doesn’t smack you in the face or cause you to rawk. It’s progressive rock, but it’s smooth.

The smooth continues with the sunny “Sea Of Smiles,” and the heavily orchestrated mellow of “The Summer Backwards.” Throughout the album, both Hackett and Squire share vocal duties often blending their vocal timbres in stacked harmonies. It works to great affect producing a “Choir Effect” Squire is known for. “Stormchaser” switches gears in the set with foreboding sounds, Bonham-esque drumming, waves of intergalactic panning, and wild soloing.

“Can’t Stop The Rain” and “Perfect Love Song” brings the record to a close. Hackett is one of the great-underrated guitarists of his generation and plays some wonderfully mature and melodic guitar. His soaring distorted lines are awesome as well. He recorded two-handed tapping before Edward Van Halen, and you can hear a bit of it on “Perfect Love Song.” While Squire is one of the most iconic bass players of all time, it’s not because of any super chops. It’s because he plays bass lines you can sing. He’s a tuneful player with a signature style and melody for days. That sensibility is all over this record.

A Life Within A Day is a strong effort by Squire and Hackett. While the music they’ve created may no longer be considered progressive by contemporary standards, one cannot deny the sense of passion, craftsmanship, and vision born from two music veterans.