The Story Of Light 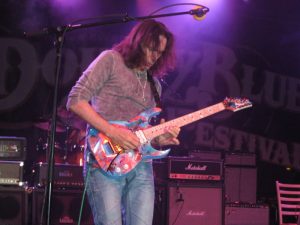 The amazing Steve Vai continues the dreamy conceptual narratives found on 2005’s Real Illusions: Reflection, with his new release, The Story Of Light. This concept album is the second installment of a trilogy showing Vai’s interest in New Age spirituality and science fiction. The Story Of Light is essentially about the journey of a man driven mad by tragedy, grief, and his assent to revelation, enlightenment, and redemption.

As long time Vai fans have come to expect, this mostly instrumental album is filled with dense production, soaring multi-layered guitar lines, thick tones, and tight harmonies. While his signature guitar and song writing style remain intact, The Story Of Light is his most ambitious and artistically expressive work to date. Vai does take risks and steps out of the box for a few surprises. He covers the Blind Willie Johnson song “John The Revelator” with a gospel choir and Beverly McClellan, who was a season one finalist on The Voice. While Vai is no blues player by any stretch of the imagination, he brings himself completely to the song integrating what he does best to a well arranged and produced number. It’s arguably the most interesting track on the record. Beverly McClellan is in her element and vocally blows the doors off the barn.

The next track “The Book Of The Seven Seals” doesn’t fair quite as well but is interesting nonetheless. You have to imagine Steve Vai on stage with a fan blowing his hair backwards and wailing on guitar, right in the middle of an all black musical theater production, complete with a full gospel choir. The juxtaposition of Steve Vai surrounded by a stage full of gospel singers in full Baptist sanctification mode is a bit strange, but somehow Vai makes it all work.

He also performs a vocal duet with singer-songwriter Aimee Mann on “No More Amsterdam,” to great effect. They co-wrote the song together and it really shines with evocative lyrics and Vai’s penchant for serpentine Lydian lines. Mann of course has a beautifully rich and resonant voice, and while Vai’s vocal contribution isn’t in the same league, he grows on you. His less is more approach is refreshing in a musical climate where most contemporary singers attempt Christina Aguilera gospel acrobatics at every opportunity.

Vai also gets in his share of familiar arena rock workouts like “Velorum” and “Gravity Storm”, and mellower compositions such as “Creamsickle Sunset” and “Mullach A’tSi”. He sings on the ethereal but engaging “The Moon And I”, with truly inspired soloing, and once again experiments with interesting foreign language sampling on the title track.

The Story Of Light is a beautifully expansive work that orbits within a galaxy we have traveled before. Vai is truly awesome throughout marrying extraordinary guitar playing, inspired compositional ideas, and a deeply personal spiritual belief. Although the spiritual storylines might leave some shaking their heads, his badass guitar playing will win over all nonbelievers.