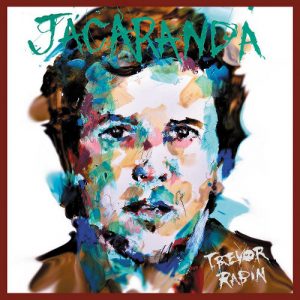 This new release titled Jacaranda is a window into the world of an eclectic musician, composer, and multi-instrumentalist. He is equally comfortable playing badass guitar for a prog-rock band, or conducting an orchestra in the recording studio. He gets an assist from drummers Vinnie Colaiuta (Jeff Beck, Frank Zappa, Sting), Lou Molino III, and his son Ryan Rabin. Bassist Tal Wilkenfeld (Jeff Beck, Herbie Hancock) guest stars on the track “Anerley Road.”

Trevor starts things rolling with some gut-bucket dobro playing on “Spider Boogie,” then seamlessly dovetails into a well orchestrated use of slide, piano, and fast guitar picking on the Yes sounding track “Market Street.” These two tracks alone illustrate the breath of Rabin’s eclectic palette. “Anerley Road” kicks in with some classical meets jazz voice leading on guitar, then abruptly shifts back to superb dobro playing. It’s true fusion, mixing many styles, textures, and captivating time signatures. Tal Wilkenfeld takes a solo on this cut and plays with a maturity beyond her years.

On “Through The Tunnel” Rabin imaginatively orchestrates beautiful piano arpeggiation, banjo, and clean electric guitar, with over the top bursts of succinct shred. His soundtrack work has given his music a greater sense of emotion, and the ability to effortlessly flow through varying moods and soundscapes. Jacaranda is full of this kind of seamless patchwork, utilizing concepts from country, blues, rock, and classical music. It’s a riveting auditory journey. Finally we get some vocals on the composition “Rescue” from Liz Constintine. This was used on the soundtrack to the film The Guardian and Constintine’s voice is angelically heavenly.

Rabin came to prominence in the early 80’s as the innovative guitarist replacing Steve Howe in Yes, but it’s truly amazing to hear how adept he is at almost all the instruments on Jacaranda. Particularly dobro, which you hear through out, and classical piano, which is on full display on “Killarney 1 & 2.” He gets into some heavy jazz guitar meets classical counterpoint on “Storks Bill Geranium Waltz,” and plays with his son Ryan on the aptly titled “Me And My Boy.” He mixes bop and shred on “Freethought,” and on “Zoo Lake” it’s back to the dobro for a sweet sentimental ballad. “Gazania” is the calling card for the entire record. It’s a country fusion expedition with banjo, a baroque vocal chorus, jazz guitar, piano, dobro, and lush nylon string guitar excursions.

Trevor Rabin has scary talent. While lesser guitarists would bore us with tiresome note density, Rabin is all about good taste, evocative compositions, earthy influences, and beautiful orchestration. His use of dynamics and counterpoint is sublime. For Jacaranda, Trevor Rabin has created a beautifully produced aural buffet of seamlessly conjoined moods, textures, and grooves.