Albums From The Milk Crate: Night Of The Living Dregs

Night Of The Living Dregs 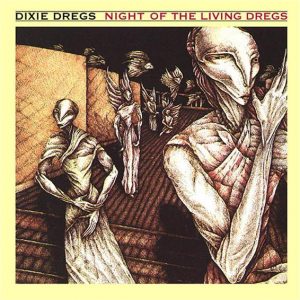 The Dixie Dregs showed the world that there was more to fusion than Miles Davis, John McLaughlin, and Larry Coryell. They were the originators of avant-garde country music. Originally formed in 1970 with the name Dixie Grit, this Augusta, Georgia based ensemble fused southern rock with The Mahavisnu Orchestra, bluegrass, rock n’ roll, and Baroque classical styles. Later, the band moved it’s base to the University of Miami’s School of Music, where despite personnel changes, Steve Morse remained the band’s visionary leader.

Night Of The Living Dregs was the band’s third album on Capricorn Records and featured Steve Morse on guitar, Rod Morgenstein on drums, Andy West on bass, Mark Parrish on keyboards, and Dr. Allen Sloan on violin. Half the album was recorded at Chateau Recorders in Los Angeles with Ken Scott (Supertramp, Kansas, David Bowie) as producer, while the other half was recorded live at the Montreux Jazz Festival on July 23, 1978.

Released in April of ’79, Night Of The Living Dregs continued on the stylistic course of the two previous records, Free Fall and What If. These recordings along with their next record, Dregs Of The Earth would make up the bulk of what would be considered their golden period, and became fan favorites for the next thirty years. The rocking “Punk Sandwich” gets things grooving with Morse’s classic horn based blues-rock lines, muscular vibrato, and dazzling chicken fried violin work from Dr. Sloan.

“Country House Shuffle,” “The Riff Raff,” and “Long Slow Distance,” show case the band at their technical and creative peak, seamlessly intertwining, layering, and harmonizing, distorted rock guitar lines with melodic keyboard figures and lush violin passages. They suddenly shift gears, turning on a dime to create jaunty duets for nylon string guitar and violin, along with epic cinematic compositions with multiple movements, dynamics, and sonic textures. Steve Morse who is arguably one of the most versatile guitarists in the world composed all these tracks. It’s no wonder he was voted Best Overall Guitarist by Guitar Player Magazine for five years in a row.

Side two is a live set from Montreux with performances of “Night of The Living Dregs,” “The Bash,” “Leprechaun Promenade,” and “Patchwork.” If you need an introduction to the miraculous picking prowess of Steve Morse, “The Bash” is where you’ll find it. Morse is famous for his flawless articulation, freakish sense of time, and warp speed chicken pickin’. His use of chromaticism, and effortless ability to perform the most complicated, yet substantive melodies at incredible tempos is legendary.

Night Of The Living Dregs is a bonafide desert island recording with a multitude of stylistic twists, turns, incredible musicianship, and inspired compositions. It gave them their first Grammy nomination for Best Rock Instrumental Performance. After this album their label went bankrupt. They recorded three more studio albums for Arista Records, broke up, reunited, released Full Circle on Capricorn Records, broke up again, and released a crop of live records both old and new. Steve Morse joined Deep Purple in 1994… And the rest is history.