In ancient times when music was considered a tangible possession, music lovers placed their prized vinyl albums in wooden or plastic milk crates. Guests could enter your living room, look through your albums, and find out who you are, and what you’re about. With this idea in mind, I present to you a series of articles about guitar records from the past titled: Albums From The Milk Crate. 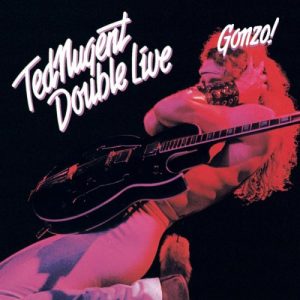 If you were a teenager in the 1970’s you owned a copy of Double Live Gonzo!. It was a status symbol, your guitar bible, and a theatrical experience. Nugent was a multi-platinum recording artist and one of the most successful touring acts in the world. With the success of Ted Nugent, Free-for-All, and Cat Scratch Fever, the live concert album Double Live Gonzo! was inevitable. With the line-up of Ted Nugent, Derek St. Holmes on guitar and vocals, Rob Grange on bass, and Cliff Davies on drums, the album went triple platinum and went to #13 on the US Billboard charts.

Side one begins with the ballsy “Just What The Doctor Ordered.” Ted brings his “A” game playing the holy shit out of the guitar using feedback, blending Chuck Berry concepts with distorted country ideas, and muted heavy-rock lines. By the end of the song, you’re primed for “Yank Me Crank Me” and “Gonzo.”

Nugent is on vocals for these hypersexual ditties and sings them like he means it. Sex has always had its place in rock and roll, and while these songs could be considered lyrically juvenile, you have no business expecting deep insightful prose from Ted Nugent. These tunes are great platforms for wild, over the top guitar playing, with absolutely no fat or slop. On “Gonzo” Nugent finds the middle ground between crazy-ass reckless abandon, inspired ideas, and pitch perfect execution. If that wasn’t enough, he starts screaming at the top of his lungs like his hair is on fire.

A killer cover of “Baby Please Don’t Go” ala Alvin Lee leads into “Great White Buffalo” and “Hibernation.” We are now in deep Nugent territory. For the unenlightened, this is what the big deal is all about. It’s the tone, the phrasing, and the mayhem. It’s about buffalos, Indians, and greedy white people too. His muted rhythm work and behind the bridge string bending is virtuoso stuff. He doesn’t just control feedback, he owns it. Then he goes into a stage rap:

“Now ya’ see this here guitar right here, now do you see it? This guitar was born in the Motor City – Detroit – murder capital. Such a healthy place for all the girls and boys it’s the murder capital of the world, a-ha… This guitar right here is guaranteed to blow the balls off a charging rhino at sixty paces it is. That’s my baby… This guitar definitely refuses to play sweet shit. It just refuses… (Controlled guitar feedback) …Shit, we’re gonna melt this fuckin’ place tonight…”

“Hibernation” is sixteen minutes of Guitar Theater. A monologue segues into controlled feedback, volume swells, on and off pick up selector shifting, violin melodies, and the band coming in with tribal rock drumming. Nugent goes ballistic but paces himself with taste and dynamics. He let’s loose with a wide vocabulary of major pentatonic ideas, double-stops, pedal steel licks, stutter picking, and sliding chordal work. It’s the kind of wild theatricality matched with precise virtuosity that you just don’t see anymore.

Side Two is more intense. You’ll need a few minutes to get yourself together. You’re already exhausted and covered in your own natural excretions, when Nugent starts kicking your ass with “Stormtroopin’.” In the solo section he does this low moaning legato thing where he plays lines with one hand, then moves to the next note just as it begins to feed back. Then he goes into super fast Chuck Berry style double-stops, like if Chuck was all hopped up on Red Bull.

“This is a love song! I’d like to dedicate this to all that Nashville pussy! This is a little love song called Wang Dang Sweet Poontang…”

Then there’s “Stranglehold,” and “Wang Dang Sweet Poontang.” Side two ends with “Cat Scratch Fever,” and the unrelenting brutality of “Motor City Madhouse.” Honorable mention must go to Derek St. Holmes for the exceptional vocals – Especially on “Stranglehold.” He’s right up there with the top tier of rock vocalists, while Nugent shows off a whole other psychedelic jazzier side to his playing during the break down solo section.

If you had to own just one Ted Nugent record, this is the one to get. The live version of “Cat Scratch Fever” truly kicks ass and is his most popular song. Nugent wasn’t into drugs and alcohol, but he more than made up for it with his passionate interest in sexual intercourse with as many women as possible. You can hear it in every note of “Stranglehold.” It crescendos with larynx bursting screams, wailing guitar licks, and orgasmic moose noises.

You might not want to play this album for your girlfriend, but it makes perfect drunk driving music during a high-speed chase with the cops behind you. Double Live Gonzo! is Ted Nugent at his absolute finest. He’s a force of nature and a criminally underrated guitarist. If you missed the 70’s, the best of the best guitar playing is on this record.