As Alice in chains puts the finishing touches on their 5th studio album, The Devil Put Dinosaurs Here,  fans have given the band the nod by propelling the newly released track, “Hollow” to Number One on the rock radio charts. That’s great news for the band, and guitarist Jerry Cantrell, who told Rolling Stone it wasn’t exactly expected to perform like that:

“We just put that song out there for the fans and then it ended up turning into a number one single, a six-minute sludgy metal tune. That’s always fun, to see something like that happen.” 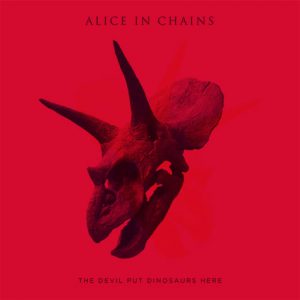 The New album will be released on May 14th, 2013 – almost four years after their last studio release, 2009’s Black Gives Way to Blue. The band has also released the album artwork, which you can see at left.

You’re definately going to recognize this as an Alice In Chains album. It’s got that gritty metal sound the band has been known for for years – although Cantrell says that it will be completely different than anything they’ve ever done before, while still maintaining the band’s identity.

A the bottom of this article, you can check out Hollow, if you haven’t heard it already, and decide for yourself.

The producer on the new album will be Nick Raskulinecz, who produced the last studio album.

Cantrell also took some time out with Revolver Magazine to talk a little about the religious themes that can be found on the new album. One theme in particular deals with the fact that the human element is often what makes a religion look bad.

What I’ve seen is the most basic message to most faith systems is in contradiction with how it gets applied. The human element seems to f–k it up. It seems to f–k up the basic truths of acceptance, loving your brother, helping each other out, not trying to kill each other or steal each other’s s–t. Those are all pretty good ideas. And most of your major religions have those things as basic tenets of the belief system. It always amazes me that some of the most hateful and hurtful things are done in the name of some sort of belief system.”

Chances to check out Alice live

Alice In Chains will also be performing some tour dates with Soundgarden, and if you’re near Camden, PA. on May 18th, you’ll have a chance to see both bands at MMRBQ’s Summer Concert Session.

The band will also be playing in Columbus, Ohio around the same time, at the 2013 “Rock On The Range” festival, which runs between May 17th and 19th, 2013. This promises to be a killer show, with artists like Smashing Pumpkins, Korn, Bush, Stone Sour, Three Days Grace, Papa Roach, Cheap Trick, and many more.

Of course, you can find all of the tour dates on the bands official website.