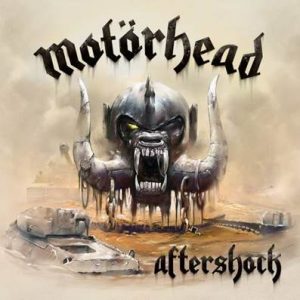 You’ve got to give them credit. For 38 years Motörhead has been churning out full bore, unforgiving killer metal. The band was formed in 1975 – that’s a long time for anyone to be doing anything – especially at the impressively high energy level Motörhead is known for. Their first studio album was released in 1977, and since then they’ve peaked at #4 on the UK charts, and #10 on the US charts – interestingly for different albums.

While popularity is a good thing for the bank accounts, you don’t get the feeling that Lemmy and Co. would be doing things any different if they hadn’t seen any type of commercial success. It’s obvious that the boys in Motörhead are on a metal mission, and they’re doing what they do because they love it.

The boys in Motörhead will be delivering yet again – this October 22nd, with their new album which will be entitled Aftershock. Recorded at NRG Studios in North Hollywood, it will be their 21st studio album, and word on the street is that it’s not going to disappoint.

Guitarist Phil Campbell, who has been with Motörhead since 1983, says, “I really think the variation on the album shows that we’ve dug deep and produced some of our best work for a long time.”

Motörhead’s discography is long and varied, but the condensed story is that it consists of twenty-one studio albums, nine live albums, twelve compilations, twenty singles, and five Eps. And that’s just the “official” count – there is plenty more out there.

At this rate the band has been firing off roughly one studio album every two years very consistently for almost 40 years.

You’ll be able to pick this one up at your favorite record store – online or otherwise – and you can get it in one of four ways.

There is a limited edition CD digi-pack, a standard CD, and a 180 gram Vinyl LP, and of course, pure digital formats will be available. For those in the US, pre-order details will be announced soon.

If you’re looking for another punk infused dose of heavy metal, be sure to pencil in an appointment the 22nd of October to get your fix!