Last week we brought you news about Rob Caggiano leaving Anthrax – and now Anthrax has already announced his replacement. 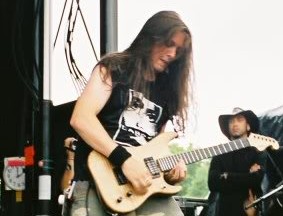 The new guitarist will be Jon Donais, of Shadows Fall – and was actually recommended by Rob Caggiano when he spoke with the rest of the band about leaving.

This is a temporary position for Jon – Anthrax has a few dates coming up in India, and the Soundwave Festival in Australia, and the upcoming Metal Alliance Tour in the US.

Jon says his bandmates from Shadows Fall are being incredibly supportive and encouraged him to take advantage of the opportunity.

Right now, Rob and Jon are working on all the guitar parts via Skype, so it sounds like the vibe between Rob and Anthrax is – as expected – very collaborative and friendly.

Guitarist Scott Ian is very excited to be working with Jon, saying:

“Jon is a bro and he’s also a total f**king ripper,” said Scott Ian. “I’ve worked with him twice before on side projects and he tears it up. I’m excited to have him on my right burning up the stage with Anthrax. 13′s gonna be a good year.”Anthrax.com

Anthrax has also made it very clear that they are not auditioning guitarists right now – so keep those emails and promo tracks to yourself – for now. There still is no news on if or when auditions will become a reality.

Shadows Fall has been around since 1995, and have released seven albums in that time. They were a Grammy Award nominee in 2008, nominated for best metal performance with their song, “Redemption”, off The Threads Of Life album.

Jon Donais shares guitar duties with Matt Blanchard, and the two are the only members of Shadows Fall who have been members non stop since the band’s beginning. The move to Anthrax will mark the first break from Shadow’s Fall for Donais.

Anthrax has a new album coming out soon – March 18th, to be exact, and that will be an EP called “Anthem”, which is an album of covers. They’ll be covering Journey, Boston, Thin Lizzy, AC/DC, Cheap Trick, and Rush on the EP.