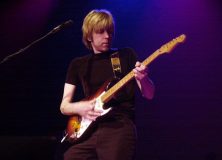 If there was any guitarist that could be used as a poster child for what other guitarists can become it would have to be Eric Johnson. With a control over the guitar that can make even the most seasoned of guitarists buckle at the knees, Eric Johnson has been one of the most influential musicians history has the fortune of documenting.

So let’s take a few, watch some of his performances and discuss what makes him so worth the attention.

Any guitarist looking for a song that can truly test his or her medal need look no further than Eric Johnson’s “Manhattan” off the album Venus Isle. Granted Johnson’s entire catalog of music is beyond taxing for mere mortal guitarists, but this one song, as far as opinions are concerned, has always stood out to me. It has it all. Elegant phrasing, excellent progressions, an abundance of tonal variation, and every time he performs it the core of the song is distinguishable, but there are plenty of new tricks demonstrated to keep it plenty fresh

Even after nearly two decades of playing that song, Eric Johnson is still able to breathe new life into “Manhattan”, keeping it every bit as inspiring and magical as when it was originally written. Why’s that? Variety.

What I mean by that is, whenever my ears are graced with whatever happens to be on the radio at any given time I always notice a sort of sameness throughout the songs. The verses and choruses when repeated sound the same as they did the first time. The themes are never explored from a theoretical or a technical perspective. What you hear is what you get. If you listen to Johnson (and watch) you can see all sorts of little things he does even after all this time with this one song that gives the listener’s ear something new to refresh the experience.

Minute details like when he uses a pick versus his fingers, or how he uses his fingers. When strumming chords he frequently swaps between a pick and his fingers to give the tone a slightly muffled sound. That’s also an effect similarly explored with different results tasteful uses of pickup choices and some twists of the tone knob on the guitar.

And certainly not to be overlooked is his impressive dynamic control. In an age where compression seemingly knows no boundaries guitarists like Eric Johnson still effectively use variations in volume to remarkable effect.

This video, before getting to the beyond revered “Cliffs of Dover” demonstrates more traits that make Johnson’s style so unique in his usual improvised solo intro. His ability to seamlessly dip between melodic lines and chords while using a pick, his fingers, and both at the same time for extra color is something we can all learn from. And notice how he hits those harmonics early on. He holds a chord shape with his fretting hand while lightly touching the strings with his middle finger and rapidly picks the strings with his available fingers to get that faint, resonating tone.

“Cliffs of Dover” while having been already analyzed to the nth degree still has plenty of elements worthy of scrutiny. Written in the key of G major the song features some snappy pentatonic runs and some wicked arpeggios. Even people who don’t care for the style of music can learn something from just hearing how scales, chords, and arpeggios are all tied together on one guitar. And then there’s how he ties these things together. From string skipping to modest tapping if there’s a technique out there Johnson’s calculated it into the plan somehow.

Johnson’s performance is something you could observe countless times and still notice something new. Some little hint of stylistic variation that keeps our attention to see what he comes up with next. That’s how he’s survived the test of time.