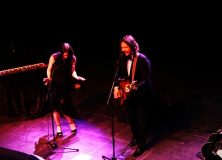 One of the things we’re constantly trying to achieve here at Guitar-Muse is to bring you all the best guitar music from the most enlightened and enjoyable guitarists. John Paul White from the Civil Wars is one of those guitarists.

We’ve been following the Civil Wars since Live At Eddie’s Attic was released, around 2009. What struck me originally about John’s playing style was his ability to fill just the right voids in the music, effectively weaving an intricate dance around Joy Williams’ and his own voice. You’ll rarely ever find John Paul White shredding – because the songs don’t need that kind of treatment.

It’s very difficult to be a guitarist in a band where for the most part you’re the only instrument – you’ve got to carry the weight and keep the song pinned down and grounded, and in John’s case, leaving plenty of room for the beautiful and sometimes haunting vocals.

We were lucky enough to catch the Civil Wars in Salt Lake City at The Depot. The show was amazing, and the synergy between John and Joy was striking. They seem to be a perfect musical match – they know each other so well that the performance becomes almost one voice as it loses its duality and becomes an entity of its own.

I really enjoyed John’s unique picking style – sometimes using a pick in combination with his other three fingers, providing an almost banjo-like vibe, but employing the deeper, more robust tones of the guitar.

One of my favorite songs, and one I recommend new listeners check out first is “Barton Hollow”, which is the title track off their album. It’s got a driving beat, and seriously intense vocals.

If you’d like to get an idea for what I meant when I talked about the fine melodic weaving The Civil Wars are capable of, check out “20 Years”, where John Demonstrates his uncanny ability in knowing when to play what – providing amazing balance for the song.

Oftentimes the melodies of The Civil Wars are described as hauntingly beautiful, and this shows through in “Falling” which is the first song that Joy and John wrote together. The vocals flow in and out of the guitar work which leaves just the right amount of space for them to work their magic. 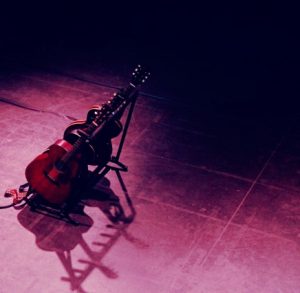 Bear in mind that while the album versions of these songs often will include other instruments such as strings, for the show at The Depot, it was just John, Joy, a few guitars, and a keyboard, which I think Joy only used for one song toward the end.

The Civil Wars have a few key things down to a masterful science – songwriting, sparsity that allows your ear to relax and absorb, and beautiful and haunting melody, and they do it all with very little instrumental backing – at least live.

It’s great to see The Civil Wars doing so well – they’ve already been to the Grammys, for their very first studio album, and won two awards there. Their song “Poison and Wine” was used on the tv show “Greys Anatomy”, and the album Barton Hollow went up to number 12 on Billboard, and hung around at number 1 on iTunes for 9 days.

I’d highly recommend The Civil Wars to anyone – especially any guitarist who wants an enjoyable lesson on how to employ tasteful and beautiful acoustic guitar for a vocalist or duo.