A Moment With Alice Cooper

If there ever was a band that opened the doors to a wider audience for horror in music it was Alice Cooper. Sure Arthur Brown had started the trend, but were I to use an analogy I’d say Cooper did to horror what Van Halen did to tap guitar. Not necessarily the first, but the ones that brought it to the widest audience and it all trickled down from there like scattering roots.

Nowadays it’s not difficult to find a metal band that makes blood and gore a bit part of their stage show, but for this we’re turning the clock back to the 60s when such things were just plain unheard of. 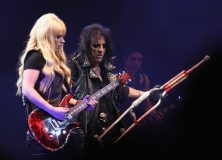 The band Alice Cooper began back in the early 60s as a group of guys that knew nothing of playing the instruments they had and as a side effect the then completely talentless group won a talent show. At that point the snowball began rolling. An interest had been kindled and the members began practicing and writing their own material, and after a few shortly lived aliases for the band Alice Cooper had been born from guitarists Glen Buxton, and Michael Bruce, bassist Dennis Dunaway, drummer Neal Smith, and vocalist Vincent Furnier as Cooper himself.

The band had realized that the music was only one part of what they were and in their eyes the stage was a vastly unexplored ocean of experimentation. That’s when the doorway for tattered clothes and makeup began to open. And a bit later when Cooper had pitched a chicken that had made it on stage out into the audience where the chicken didn’t meet a welcoming fate. As a side effect the band made front page news and shock rock as we know it was born.

Since those age old days Cooper has used guillotines, fake blood, nooses, and any other means of execution or lustful innuendo on the stage and lest we not forget his iconic reputation for bringing a boa constrictor out on stage. In regards to horror according to an episode of MacGyver I’ve seen psychologists speculate everyone has a fear of snakes (season 1: The Golden Triangle), so by that logic that means that Alice Cooper puts himself in a perpetual state of fear for our entertainment. Sure he looks relaxed as he licks the snakes, but he’s really horrified. Now that’s horror. 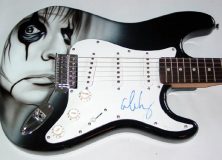 The band Alice Cooper is much like what Frank Zappa’s band was. Members come and go to shape each song into its own entity and live band lineups differ from the lineups that are found on albums. Back when Glen Buxton and Michael Bruce were held a monopoly on the band’s guitars their music was much more progressive rock, but since then they’ve welcomed a greater variety of influences to colorize the music which has grown to a heavier metal style for the most part.

Alice Cooper in recent years has also been wont to welcome an eclectic variety of guitarists to perform both live and on in the studio to add their own stylistic twist to the music. 2011’s Welcome 2 My Nightmare alone featured Vince Gill, John 5, Patterson Hood, Damon Johnson, and Keri Kelli in addition to Pat Buchanan’s guitars. His current live lineup, which is a separate group almost completely, has Orianthi, Tommy Henriksen, and Ryan Roxie all on guitars with Glen Sobel and Jonathan Mover on drums, chuck Garric on bass, alongside Cooper himself who often indulges in the guitar on stage.

The moral of the story? Alice Cooper is cool if only because he recognizes that you can never have too many guitarists in one band.