Gwar. Gross As They Come

The month of horror continues as we look at among the most putrid of bands ever to have disgraced the earth. Gwar. Gwar is a walking, touring horror movie prosthetics, animatronics, and blood in all. If I were to describe Gwar to anyone who had no clue who they are I’d say they’re kinda like the watermelon smashing Gallagher only instead of innocent fruits they use fake corpses modeled after several historic figures and celebrities that shower the audience with blood, guts, and other vital organ entrails… only grosser.

The Legacy of Gwar

Gwar is unique in that unlike most bands they have two backstories as though two parallel universes of Gwar had collided into one. In one origin story of the band back in 1984 a group of guys were playing in the band Death Piggy while on the side pushing forward on a movie project that used several over the top gruesome props and costumes.

Band founder and last remaining original member Dave Brockie made the suggestion to use the props and costumes designed for a second band to open for Death Piggy as a joke band whose name has been echoed through time as “Gwaaarrrgghhlllgh” which was later shortened to Gwar. The band was made with an intended destiny of coming and going while the group worked on Death Piggy and their movie, coming and going without anyone being any wiser as to what hit them.

That is until the plan was disrupted when a fan base started to establish itself.

The group began to notice that people were showing up for Gwar then leaving afterward. One thing led to another and both projects were pitched to the way side for Gwar to take over. And that they did.

In the other origin story and probably the more famously known origin Gwar was a group of aliens that crash landed in Antarctica where they were frozen for God knows how long until they were discovered, thawed out, and have since taken credit for everything mankind has accomplished from creating music to creating the first video games as well as the things that people typically blame others for like global warming, pollution, and warfare. Even while they were frozen they take credit for having done all these things. 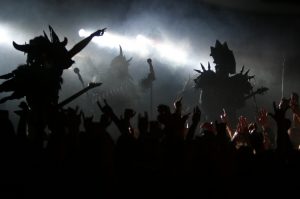 In this reality we’re not looking at costumed nutcases, but actual aliens each with a name as tasteful as their heavily spiked, deformed and sinewy, and rather phallic appearances. Lead singer Oderus Urungus leads guitarist Balsac the Jaws of Death, drummer Jizmak Da Gusha, bassist Beefcake the Mighty, and newcomer guitarist Pustulus Maximus in their goal to eradicate all of existence by being a touring metal band. Good plan.

The Music of Gwar

Gwar’s music has been many things over the years, but at the core they’ve been either punk or metal if not a bit of both at times. The music is usually aggressive and energetic, guitars tuned down just a bit, and always has Oderus Urungus’ bellowing throughout the songs. The changes in their sound have largely been contributed to the several line-up changes the band has had over the years. And by line-up changes I mean the people in the costumes. Since then they have released 12 full length albums with a couple of Eps and live albums. They have also secured signature guitars from ESP and Schecter over the years.