The Master of Horror Himself

It’s the last day of October and consequently Hallows Eve itself, and who better to pay tribute to than the band that has made a career out of writing horror stories in music than King Diamond and Mercyful Fate. Granted the latter wasn’t so much specific on the telling of horror stories, but it was an integral stepping stone to the band King Diamond which changed the world of metal. 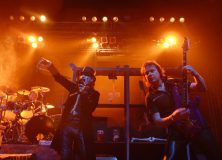 While the legend of King Diamond doesn’t begin at this point the biggest monumental step towards the bands we know today started in 1981 when vocalist Kim Bendix Petersen who goes by the pen name King Diamond along with guitarists Hank Shermann and Michael Denner, the former which has been with the band in ever stage of activity while the latter made intermittent appearances throughout the career. Bassist Sharlee D’Angelo and drummer Bjarne T. Holm have both been staple members since the early 90s when they replaced original members Timi Hansen and Kim Ruzz. Apart from those lineup changes Mercyful fate has had a very strong and consistent lineup since its origins which is a rarity for metal bands.

While Mercyful Fate formed fresh into the 80s in 1981 their first album Melissa was releaed in 1983 where they introduced a facepainted vocalist mutton-chopped and mustached to the extreme, singing soprano about various occult themes to the energetic riffs and bad ass lead guitars of both Hank Shermann and Michael Denner. The roots in writing horror stories began to show for the song Melissa which was based around a human skull given to King as an odd gift that bared the markings of an untimely end. King had essentially built fiction around everything he could discern about the artifact and gave it a narrative to follow the music.

Mercyful Fate had split up after their second album Don’t Break The Oath when King went his own direction to form his solo band King Diamond with guitarists Andy LaRocque and Michael Denner who followed over from Mercyful Fate along with bassist Sharlee D’Angelo and joined by Mikkey Dee on drums.

Unlike Mercyful Fate King Diamond had a much longer laundry list of lineup changes, but since the turn of the century into the new millennium the band found its stable lineup when King and LaRocque were rejoined by already previous members Mike Wead on guitars and Hal Patino on bass with the new drummer Matt Thompson. The only alteration since then has been the joining of Livia Zita, King’s wife, in 2003 as an extra vocalist.

King Diamond’s first album was Fatal Portrait which was a classic, but it was the follow up Abigail in 1987 that really put the band on the map. The ghost story of an inherited haunted mansion by the malevolent spirit of a little girl set the wheels in motion for a career of ghost stories that is still going to this day.

Since the origin King Diamond has released twelve full length albums and Mercyful Fate has reformed and released seven albums of their own.

The Style and Sound

Both bands have similar sounds, but that’s only in as much as they are both bands from the 80s, but they’re really only just similar. Mercyful Fate was fresh out of the 70s so the decades influence was still present while King Diamond came about. 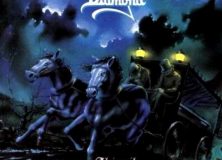 Mercyful Fate strikes me as something closer to what Rainbow had been doing earlier with the energetic music, but with more darker overtones to add a different color… namely black. It was much more of a traditional metal sound, which makes sense given the band was still in the formative years of the genre.

With King Diamond I can summarize it up easily. Andy LaRocque and Mike Wead. That’s all you need to know. Those guys were genetically engineered in a laboratory to be the perfect guitarists. With crisp and refined technique, a hint of the neo-classical style here and there, plenty of 80s shredding, and the damn most memorable haunting melodies out there. The music was perfectly written to accompany the horror story lyrics.

Musically King Diamond was much more developed as an 80s metal band the style being consistent with a lot of the common techniques that were used at the time. Tapping guitars, the classically inspired licks throughout the shred solos, and the trademark use of reverb the 80s is known for. Since then as the band has grown I’d describe them as more of a progressive metal band if anything, but that’s something that could be debated all night long.

Anyway. What better way to celebrate Halloween than to indulge in King Diamond’s Halloween off Fatal Portrait? Happy Halloween, everyone.