Lordi – The Other Costumed Freaks

As long as we’re highlighting groups of nut cases dressed up like big, goofy monsters Lordi seems a logical next step. As Lordi rose to fame they have been inevitably paralleled against Gwar in comparisons between their elaborate costumes; and while Lordi also has a bit of a mythos surrounding the band the similarities between the two pretty much end there. 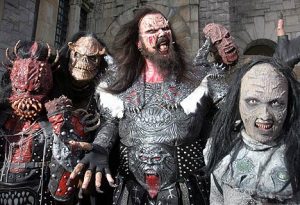 The heavy rock and metal band Lordi’s first conception dates back to 1992 in Finland when vocalist Tomi Petteri Putaansuu (also known as Mr. Lordi) who had an invested interest in horror movies and music groups that made use of elaborate costumes and visuals during performances, Kiss and Alice Cooper being among the most notable influences, he had begun working towards making the band the reality it would become in 1996 when guitarist Jussi Sydanmaa (Amen) and bassist Sami Keinanen (G-Stealer). A year later they would be joined by Erna Inari Kaarina Siikavirta (Enary) on keyboards and they would collectively record the first Lordi album Bend Over and Pray The Lord which would never see the light of day since Anaconda Records, the label that was to release it, went belly up in bankruptcy just before the album was slated for release.

As the band pushed forward to make their second album (could it be argued as a second debut album in this context?) G-Stealer was replaced by Sami Wolking (Magnum) and they were joined by the drummer Sampsa Astala and for the first time what is typically considered a complete lineup was established.

Their first album that would actually see a release came out in 2002 and brought the band significant attention as a side effect, but it was the song “Hard Rock Hallelujah” off their 2006 album The Arockalypse that seemed to spread like a rampant virus bringing even more attention to the group.

Speaking of “Hard Rock Hallelujah”, the song was performed during a 2006 Eurovision Song Contest where Lordi found themselves amidst controversy between Finland and Greece given the opinion that the band was associated with Satanism. In short everyone saw them and agreed they were ugly ergo they must be evil. The band responded by stated that actually listening to their music was all you needed to do to disavow any such claims as pure rubbish. They won the argument and gained entry into the competition. I don’t personally know anything about the scoring system of the Eurovision contest, but from what I’ve gathered they did exceptionally well and won the whole thing and at the time set a new record for a score of 292 points.

The Music of Lordi

Lordi is through and through a hard rock and metal band. The band has cited Kiss as being among their biggest influences as well as a plethora of other older rock bands, but really all you need is to listen to their music to figure that out. Personally I wouldn’t describe them as having really innovated anything with the guitar, but rather an idea of what old 70s and 80s rock bands would sound like had their careers begun around the turn of the millennium.

Since their beginning they have released five full length albums (six if you include the one that wasn’t released) and two live DVDs. The theme of horror movies and monsters has been a consistent theme through their lyrics, music videos, and live performances.