Introduction to The Month of Horror

You know what? October rules. The one obscure time of the year where it’s socially acceptable to decorate your front yard with severed limbs, tombstones, and all that is macabre. Last year we presented a series of image galleries for guitars based around horror movies. Halloween’s coming and since it’s time to push forward and do something new (and also because there probably isn’t enough material left out there to reuse that idea) we’re going to present a series of artist spotlights paying tribute to various bands that have made horror movies and themes a huge part of their concept if not the entire purpose of their being.

To get this started off on the right foot we’re going to front this series none other than the heavy death metal band Mortician. 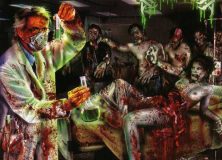 Mortician’s very first incarnate back in 1989 by bassist and vocalist Will Rahmer, guitarist Matt Harshner, and the late drummer Matt Sicher. The band had shortly gone by the name Casket, but after they had written their first song “Mortician” they wasted no time switching the band’s name over to the much cooler alternative.

Given the song’s source inspiration was the movie Phantasm in vein of the Tall Man who walked the halls of the mausoleum, taking corpses and converting them into slaves for… whatever they needed slaves for on Dune, and sending little spheres around to relieve people of that pesky blood that circulates through their foreheads.

Come the turn of the decade into the 90s, as is the case with many death metal bands, line-up changes were abound and it was then that the current guitarist Roger J. Beaujard joined as a replacement for the previous guitarists and with his mastery of drum machines as a replacement for Matt Sicher who was exiled from the band.

Since then they’ve released five full length albums, seven Eps, and a hand full of compilations and demos, and a live album all of which pay tribute to countless horror movies both revered classics and campy cult gore flicks alike.

Unlike a lot of bands Mortician thrives on writing not only about the movies that set the bar for horror, but the obscure ones that only the aficionados could point out on a whim. Texas Chainsaw Massacre has been a frequently referenced franchise as has Phantasm, but they make sure to give such hits as Cannibal Girls, Lisa, Lisa, and Night of The Bloody Apes their fair share of the spotlight.

Musically Mortician is about as heavy a band as it gets. On Metal-Archives.com they are listed as “brutal death metal/grindcore” and that is exactly what they are, always have been, and always will be. Absolutely no surprises. In a nutshell their songs, while pretty short by nature, sound like they are audible interpretations of what it probably feels like to succumb to any of the untimely deaths in the various movies they write about.

Their music is as drop tuned as it gets with some of the most guttural growls on the market. Mortician predates the generation dominated by scooped mids so the guitars are all thick and beefed up with mids and lows reinforced by the bass’ thick and low punch. The drum machines, while not standing out any more than anything else, work well with the style they go for when they aren’t using real drums.

Since there’s no way anyone is going to listen to their music and figure out what movies they reference by the lyrics alone they’ve included samples from the movies each song is about as to help us piece the puzzle together. Plus the cover art for their albums have almost always been inspired by various movies from the bone and corpse filled room from Hacked Up For Barbecue much like the house in Texas Chainsaw Massacre to Darkest Day of Horror’s nod to Lucio Fulci’s classic Zombi to Re-Animated Dead Flesh’s tipped hat towards Stuart Gordon and Brian Yuzna’s (and among my personal favorite movies) Re-Animator; the film adaptation of HP Lovecraft’s Herbert West: Re-Animator.