It’s as easy as pie to figure out what Trans-Sylvanian Orchestra is all about if you’re already familiar with Trans-Siberian Orchestra. The latter established a lofty career in taking Christmas songs and reworking them into whole new works of art. Trans-Sylvanian Orchestra is an obvious nod to the concept of Trans-Siberian only they take classical music used with horror movies and rework it in much a similar way… actually… past the concept they’re not similar at all. 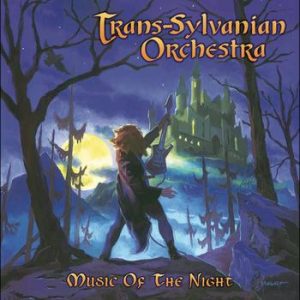 This Trans-Sylvanian Orchestra began early enough to have a debut album released in late 2008. The album Music of The Night was written and performed by Andrew Synowiec on lead guitars, Dan Marfisi on drums, bass, and rhythm guitar, and Mark Adam Watkins on keyboards with Cameron Stone periodically playing the cello.

Since Music of The Night’s release Trans-Sylvanian has been as unheard of as they were before the album was released so there’s no clue whether they’ve become recluses while working on the follow up or the band was just a quick fling.

The Music of Trans-Sylvanian Orchestra

It’s almost impossible to not have this discussion without a direct comparison to Trans-Siberian Orchestra surfacing. In some ways I suppose that’s good, but it can also stand in the way.  Trans-Sylvanian Orchestra is still very much in their infancy so stylistically it’s a bit early to see where they’re going with their music. It’s really only at face value that they should be compared to Trans-Siberian because musically the two are practically apples and oranges.

While Trans-Siberian Orchestra is a very classically influenced band with greater resources available and a lot of emphasis on vocal arrangements Trans-Sylvanian Orchestra brings more of a progressive twist to their music and the complete absence of any vocalists leaves much more breathing room for Andrew Synowiec’s lead guitars.  A lot more room.  This is an album dominated by lead guitars. Also considering how young Trans-Sylvanian Orchestra is their music has a bit of rawness to it. I don’t mean that they’re missing beats all over the place.  Far from it, but at the same time they don’t have that really tight sound that you get from bands that have played together for decades.

As far as opinions are I think Trans-Sylvanian Orchestra have condemned themselves to an eternal comparison with their peers; kind of in the sense that someone can’t talk about Slipknot without someone comparing them to Mushroomhead even though they’re both stylistically very different. But I think they’ve got their own style and it’s strong enough to stand up on its own two feet. While the concept of covering and reworking classical music doesn’t reek of originality it doesn’t require it to be enjoyable to hear and it still fits the Halloween theme well enough.