As long as I’m prattling on and on about bands blatantly inspired by Trans-Siberian Orchestra Van Helsing’s Curse is the next logical step after Trans-Sylvanian Orchestra. Actually when you consider the chronology of the discussion Van Helsing’s Curse probably should have surfaced sooner, but whatever. I’m blaming sleep deprivation for this one.

The History of Van Helsing’s Curse 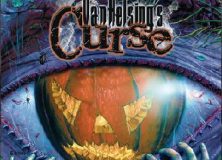 Legend has it that vocalist Dee Snider had been at a Trans-Siberian Orchestra concert and he pieced together the idea of applying an orchestra to a metal band with reworked Halloween music to much a similar effect. It’s a pretty cut and dry story beyond that, though the gap between Van Helsing’s Curse and Trans-Siberian Orchestra was narrowed substantially when Snider got guitarist Al Pitrelli and pianist Jane Mangini to join the band, both of which are also in Trans-Siberian Orchestra. There isn’t much of a story beyond established musicians joining forces so I’m not going to stick on the topic too long.

The Music of Van Helsing’s Curse

If I were to summarize Van Helsing’s music as simplistically as possible I’d say it’s exactly what you’d expect. It’s a darker version of of Trans-Siberian Orchestra that specializes in spookier and more haunting music and boy did it hit the nail on the head. The songs sound big, the arrangements are fulfilling, and there’s a horror story told throughout the album if concept albums are your thing.

Unfortunately this many years after the band’s advent they have only one album, 2004’s Oculus Infernum. Each song dips in and out of various songs and sometimes splices a couple into one, but they seldom really come off as just cut and dry covers. If we’re gonna start throwing the “C” word around it’s at least worth saying these are the kinds of covers everyone hopes for. They’re tastefully performed, faithful to the emotion of the original, and still bring something new to the table making you feel like you’ve spent your time well. You may even find yourself debating preferences between Van Helsing’s version and the originals.

Oh, and did I mention the guitars are incredible? To articulate myself accordingly to the occasion I wrote down every word in my vocabulary and proceeded to hand pick every word I thought would do justice to the guitars. The best ones I got were “holy crap”. Sure it’s lacking in depth, but boy does it fit. The rhythm guitars are tight, deep, and when they need to be pummeling and add to the suspense that’s being built. The solos are shreddy and melodic

Furthermore I’ve listened to Oculus Infernum God knows how many times during the writing of this (as well as the songs they’ve based their music around a handful of times) and each time I still find new things about each song. If that’s your thing then this album is definitely worth entertaining. The attention to detail is top notch and it shows through the performance.

If I were to edge in anything that could be seen as a complaint it would come down to the songs they’ve based their music around. When you start talking about reworking Halloween music the songs that go under the knife seem predictable. John Carpenter’s Halloween theme, “O Fortuna” from Carmina Burana, and the intro to Mike Oldfield’s “Tubular Bells” always seem to surface and while Van Helsing’s Curse’s use of these songs is top notch and some of the best I’ve heard I always find myself longing for other songs. The resources are out there. But it’s really not all that bad. Their use of things like the Jerry Goldsmith’s “Ave Satani” from The Omen , Mussorgsky’s “Night on Bald Mountain” and “Cry Little Sister” from Lost Boys are welcomed additions.

Overall it’s one of the best albums I’ve heard in a long time and it’s a bit surprising to me that it’s been so under the radar for as long as it has. The band still tours, but aside from that they’re pretty dormant.