Everyone grows up with music. Captain Obvious moment I know, but it’s true. We all have bands that we listen to because our parents listened to them and they were just around more often so they’re just sort of branded into our brains. For me White Zombie was among those bands. My dad had White Zombie recordings around and the band has become as much a part of my child hood as Legos and Super Mario Brothers.

Over the years since the 80s both bands have only become more and more recognized in the world of guitar music for both their extensive attention to the visual side of the group both in terms of packaging and live performances. Plus both groups have awesome guitars. What more could you want?

A Moment of History The band White Zombie, which was named after the 1932 Bela Lugosi movie of the same name, was founded in 1985 by the famed vocalist Rob Zombie and bassist Sean Yseult who were shortly joined by guitarist Ena Kostabi and drummer Ivan de Prume. Come their debut album Soul-Crusher in 87 they were on their third guitarist Tom Five and drummer Ivan de Prume who were the first guitarist and drummer respectively heard on record and the sleazy punk influenced style had been set in stone as the roots of White Zombie. And the world rejoiced.

Come time for their follow up album Make Them Die Slowly the band had recruited yet another new guitarist John Ricci and the band started to edge away from the punk style to a more straight forward metal style and the bridge between their original style to the style they’ve become known for was formed. After the gap was bridged Jay Yuenger took over on guitars shortly after Make Them Die Slowly was released, but the world had to wait a few more years yet to see just what he was going to bring to the table.

In 1992 La Sexorcisto: Devil Music, Volume 1 was released and there wasn’t a lick of punk to be found in the style, but rather a much more rhythmically driven album with a lot of old horror movie samples caked all over the place – a theme and style that would be developed even more in the 95 release of Astro Creep.

Then in 1998 the short heard the world around was fired. White Zombie had split up and Rob Zombie went on to his solo project that picked up where White Zombie left off with great attention to horror themes. It was also when the Rob Zombie band formed that the visual side really came to fruition. With White Zombie live performances came down to a group of tattooed metal heads running around looking like sweaty metal heads. With Rob Zombie makeup, costumes, props, and Phantom Creeps robots began showing up. 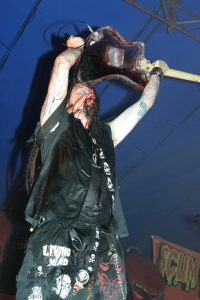 White Zombie has had a variety of styles since the initial inception starting as a punk influenced weirdo band to thrash metal to a more groove oriented metal to the industrial metal style that would be further carried on when Rob Zombie formed. The band gradually included influences from various old B movies and back in the 80s and 90s before the internet’s impact White Zombie was the perfect band for people looking for B movies to watch as well as the aficionados that could already relate to Zombie’s influences. Though both bands have been known to use effects to gain very original feelings to compliment the surreality of the music. And what would a highlight like this be if I didn’t recognize the use of a slide to give More Human Than Human its distinct sound?

The band Rob Zombie pretty much began when the signature style had been realized. Thick industrial elements, heavy guitars thanks to Mike Riggs, and horror themes all over the place. The style of music hasn’t changed as dramatically over the career, more so it’s become a visual playground. As I mentioned earlier between the props and dancers and Mike Riggs’ blood filled Fernandes Vertigo that he pours blood on himself and the audience with Rob Zombie is a much stronger merge between audio art and visual art.