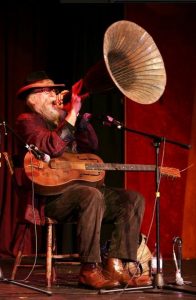 Baby Gramps is a Seattle legend, often seen out busking his with his beard and his scrambled medleys of ragtime, sea chanteys, early New Orleans jazz, traditional blues, and Baby Gramps originals.

To say that he plays old National Steel resonators fingerstyle doesn’t quite describe the Baby Gramps experience. In the video that follows, you will see all of the following:

…all of this while Gramps sings the verses of “Satisfied & Tickled Too” in a voice that sounds very much like Popeye the Sailor.

This video is highly recommended if you’ve been searching for an experience that’s somewhere between Tom Waits, Dr. Seuss, and 1930’s cartoons. Also recommended if you want to freak out the guy in the cubicle next to yours. Turn it up!

If you’re hungry to have your brains scrambled a bit more, head on over to babygramps.com and the man will be happy to oblige–he’s touring the west coast this fall.