Big Breaks – How They Made It: Jimi Hendrix

So I was sitting at my friend’s house and he was at the time forcing me to watch various clips on YouTube. In the midst of all of that he crammed in my face clips from recent American Idol performances highlighting one of the rare breeds of contestants.

The guitar playing Phil Phillips. I think the fact that I’ve just heard of this guy speaks volumes about my grasp on popular culture, but that’s a whole different discussion. In the aftermath it got me thinking. The guy in one way or another has made it. He’s shown he has a certain vibe about him that separates him from the rest and people are drawn to that. So even if he doesn’t win American Idol he has the world’s attention and I’m sure people will still seek him out. Just being on the show alone will look good on a resume.

So what it got me thinking about was that everyone that has had a big enough impact on the music we listen to had a big break at some point. Perhaps some were more gradual and others really instantaneous, but at some point everyone sees a sort of snowball effect that rockets them up into the vicinity of the top.

So that’s what this is about. A search for the moments that have put various artists into a position with the most doors open and what caused them. 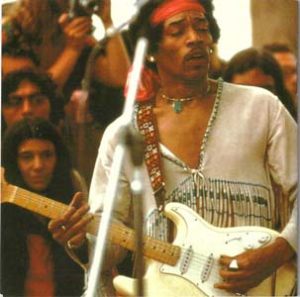 What better person to kick off something like this than to cover arguably the most prolific guitarist known to man? I would argue three specific events that led up Hendrix really hitting the limelight.

Back in the early 1960s his tenure in the military was cut short due to an injury. That is event one, I would say. Toying hypothetical what ifs and with the cold war waging on a deployment to the wrong place could have meant a whole different legacy – like no legacy.

Instead his discharging put him in a position to do more session work. Event number 2 at your door. During his session work he met Animals bassist Chas Chandler who coaxed him into moving to London where he formed the Jimi Hendrix Experience. That was the era just before he blew up into the global phenomenon we know today, for after that a simple tour exploded into what would become a way of life for guitarists to follow pretty much forever.

The impact was so great that whether or not he played a certain pedal or amp could be seen as a make or break situation. If he didn’t play with a wah pedal, for example, how long would it be before they became as popular as they have? If he didn’t use an E7#9 would anyone else have ever thought to try that chord?

In his time there wasn’t one manufacturer that didn’t want him playing their gear and everyone that did produce the gear he used flaunted it like a woman flashing at Mardi Gras and the masses followed with joy, and the then-future history as we know it today full of wah pedals, Marshall stacks, and upside down Stratocasters is all thanks to this moment.  Here’s to you, Jimi.  We couldn’t have done it without you.