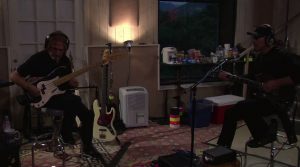 This whole thing about getting Black Sabbath back together, getting in the studio has been quite an epic story. Early on, there was a bit of a drama – even news that the whole thing wouldn’t be happening. (most of that is covered / linked to from this article)

But they made it through, replaced Bill Ward in the studio with Brad Wilk (Audioslave, Rage Against The Machine), and got the gears of the machine turning again.

Now Sabbath has released a track listing, a new video, and news of a single that you’ll be able to snap up in a few days (April 19, 2013).

This historic album has been well documented, through videos and interviews, and well publicized – but the actual recordings are still under wraps – save for a few videos of Sabbath in the studio. All the more reason to be excited about the upcoming single!

Rick Rubin is on a mission with this album – saying, “My goal is to make something really great, that I could listen to forever. That’s the whole heart of it.”

I really believe this will be a great album – the energy seems to be there – Rick has clear cut goals and objectives for the band in the studio, and the band seems to be in top form, and really enjoying what they are doing.

The Video From Sabbath 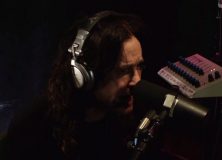 Since this is the most immediate gratification we can get on the topic, we’ll start with the video. It’s a great little clip, mostly detailing the interpersonal aspect of getting (most of) a band back together after 33 years. Rick Rubin says that there was a bit of trepidation at the start, but once they got back in a room together, they “feel like the band again”.

The single coming out on April 19th is the second most immediate gratification we’re going to get – and it’s just a few days away. It’s an eight minute song entitled “God Is Dead?”, and it will be available for download / streaming.

This track listing was made available just a few days ago:

The album is due out on June 11, and as you can see is right around an hour long. It looks like they’ve gone for the longer songs – with the shortest being just under five minutes long, and the longest almost eight minutes. That’s the one we’re going to get to hear on the 19th of April.

So stay tuned, we’ll bring you more as it happens!