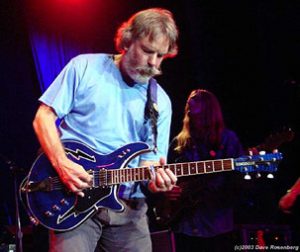 In the post-Garcia world of psychedelic melodies and music trips, Grateful Dead picker Bob Weir has carried on in a number of other groups by way of similar sonic messages. When he performs with the Dead, the Other Ones or Furthur, Weir’s set up frequently includes a custom blue Modulus G3FH “Lightning Bolt” guitar.

Grateful Dead enthusiasts agree that the two lightning bolt cut outs on the soundboard of Weir’s Modulus G3FH guitar is a direct reference to the cover art from the album, Steal Your Face, but that’s just one unique characteristic of this electric axe.

The Genesis neck, patented by Modulus, has 22 frets, is made of quilted maple and carbon fiber and has a Chechen wood fingerboard. Chechen heartwood, known to be fairly dense, can provide a high quality finish though the lumber is not often used for neck material, like the more familiar mahogany, rosewood, pao ferro or basswood.

The specs on Weir’s G3FH

The back and sides of the G3FH, carved from a single piece of quilted maple tonewood, joins the solid hand carved Sitka spruce top to form an Ibanez Artcore-looking hollow body, distinguished by an extended upper bout and superior sound quality.

The Modulus sports ivoroid binding around the body and lightning bolt cut outs and a custom handmade carbon fiber tailpiece. Guitar maker Rich Hoeg fitted it with a pair of floating mini-Humbuckers, master volume and tone controls plus a 3-way selector switch.

Modulus has a longstanding relationship with the Dead

Modulus, which created custom six string electrics for Jerry Garcia and Bob Weir, started out as a bass guitar company in 1977. The Modulus website explains, “The Grateful Dead’s Phil Lesh played one of the first carbon fiber-necked basses and from that point forward, the most accomplished and creative bassists in the world have played a Modulus.”

After seeing and hearing Lesh’s bass, guitarists Bob and Jerry were so impressed they subsequently joined the bandwagon (so to speak) and had Modulus luthier Rich Hoeg design signature artist models for each of them. Hoeg worked with Weir to create the “Lightning Bolt.”

Rich Hoeg, who left Modulus to form Hoeg Guitars, still maintains his connection with Weir. In fact, Hoeg replicated the instrument that perhaps Weir holds closest to his heart, which is his deceased brother’s guitar.

“One of the first instruments Rich built under his own name was for Bob Weir: a copy of Bob’s brother’s 1956 Telecaster,” appears on Hoeg’s site.

The Modulus G3FH “Lighting Bolt” provides particularly clear, harmonious lows and midrange that are both rounded and rich due to the rigidity of a distinctive carbon fiber neck, the dynamics of the solid Sitka top and floating mini-humbuckers; a perfect match for counterculture ace Bob Weir, notorious stickler for excellence when it comes to playing live.

I would like to buy an Alembic or Modulus-type guitar, but I would settle for a Cowboy Delight from the Eighties (Ibanez I think). The Bob is a legend. It is he who inspired me to learn guitar – a pretty monumental influence in my life.

Awesome…I always wanted to know a little more about this guitar. Now I need to win the lottery so I can have Hoeg make me a copy!