DIY: How to Build a Passive Guitar Switch Box Out of a Tuna Can

The Editors challenged me to build a passive switch box, ala the EHX Switchblade, for less than $35.00. I said I could build it for $24.00, but got to thinking…”Why spend that much money? Why not build it using an unconventional case and save the bucks?” That’s what I did…

An A/B/Y foot switch box that allows you to switch one input (Y) to either of two outputs (A/B). Since it’s a passive box (no power needed), you can also hook it up backwards – either of two inputs to one output. I added LEDs to show which output was selected, which makes it necessary to use a battery or pedal power to power the LEDs, but the switch is still passive which means you can use it either way. I’m calling it the “Stratkat Switcheroo.”

If you just don’t want to buck convention, buy a traditional pedal enclosure and go from there. My case started life as a 5 oz tuna can. You can use a tuna, cat food, soup can, Philli Cream Cheese, or whatever container. Use your imagination. It has to have a top and bottom, and it has to be stiff enough for you to mash the foot switch. It also shouldn’t be too tall. Other than that, you are in creative Heaven! 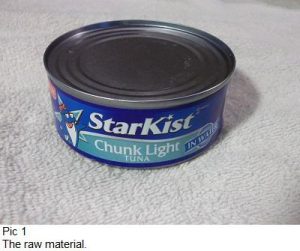 Try to use a metal can so you have some shielding and don’t pick up unwanted noise. If you use a plastic can, you might have to use shielded wires for the signal path but that really isn’t a big deal, just a little added expense.

Pic 2 shows where to start. 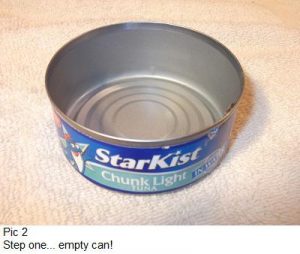 The only problem with a can that contained something smelly is getting rid of the smell after you clean it. A little bleach will do the trick though.

Make sure you save the top as you are going to use it as the bottom of the “pedal.”

Since we eat tuna 2 cans at a time, I had an extra can that I made the tabs shown in pic 3. Wiring this thing is really easy so this pic is really just to illustrate that everything will fit in the can! 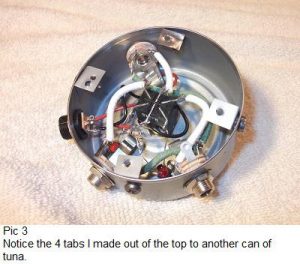 I just cut strips off the extra top and bent them so I had a bracket about 3/8″ on each side. I made 4 but I think 3 will work just as well.

Remember that the can will be upside down when you use it so lay out your in and outs accordingly.

Be really careful drilling because the “tin” in this can is really thin and the drill bits have a tendency to tear it up. Take your time and use a scrap wood backer where you can.

Pic 4 shows my layout, input on the right, outputs on the left and 9 volt power jack for the LEDs on the top. You can use any layout you like. 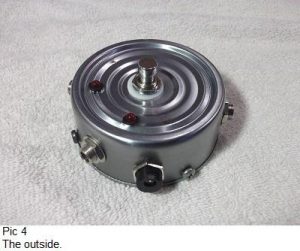 Pic 5 shows the bottom of the pedal which is actually the can top. The screws I used are some metal stud screws from my construction days. Any short, sheet metal screw will work. A little flatter head would be better that what I wound up with but the “Velcro” should work fine for attachment to the pedal board. 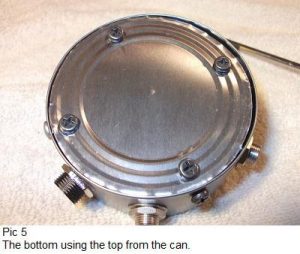 If you don’t use “Velcro” on your board, you can adapt any method you use on your other pedals to secure the switch.

Pic 6 shows the wiring diagram. Here is the parts list: 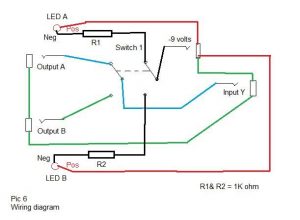 Just remove the 9 volt jack and wire your battery clip in its place if you’re a battery person. I’d put a small switch in the lead to Switch 1 on order to save your battery, though. One or the other LED is always on when power is applied.

As you can see, this project is really easy to build and is really handy to have in your arsenal, even if you don’t use it. You tie all the sleeves together and switch the tip signal from the jacks. Use the other side of the switch to change the LED power so you know which way the signal chain is flowing. The resistors are to drop the voltage down so the LED works. The LEDs just won’t work without them. The beauty of this simple circuit is that it needs no power to operate, unless you want the LEDs. It works to switch pedal chains or switch amps at the end of the chain. You can daisy chain them together for infinite possibilities. Joe Bonamassa uses 3 amps and two switches in his signal chain to swap around for lead, thick or clean tones.

The added benefit to this thing is that you can use it backwards, too… 2 inputs to 1 output. Plug two guitars in and switch between them without fooling around with the guitar cable, or, if you’re really cool, your wireless setup.

There you have it. Let’s figure out the cost. A tuna, chicken, deviled ham or crabmeat can will work perfectly and requires no modification to the can itself and it fits with the other pedals well. So, the cost of the case is $0.00 as you bought the tuna, or whatever, to eat and the use of the can is a bonus.