Guitarists are infamous for being very opinionated on which instrument’s (and even components of those instruments!)  are “the best”, but in being dogmatic in instrument approaches they can miss out on great opportunities.  I recently purchased a used Galveston acrylic (i.e. “see through”) electric guitar that was a great deal and a great addition to my collection.  Since most players have substantial GAS (Gear Acquisition Syndrome), I thought I’d also talk about some of the processes that I use in buying a guitar.

Why buy another guitar?

Presuming that you have a guitar that you really like, in my opinion there are only three reasons to buy a guitar.

Backup guitars come in handy for people who like playing a certain style of guitar (like a Strat) and find another one at a reasonable price.  As I mentioned in my last evolution of a live gig post, I never like bringing anything extra with me, so this reason doesn’t carry a lot of weight for me – which brings us to reason #3.

3. It does something that your current guitars don’t do.

New functionality has fueled nearly every gear decision I’ve ever made and for the most part it’s served me well.

One guitar model I’ve never owned is a Les Paul. In addition to it’s distinctive tone, I  was interested to see how the 24.75″ scale length of the LP ( shorter than the Stratish 25.5” length I was used to) affected tone, feel and string tension.  While I wasn’t looking specifically for a new guitar, a recent trip presented an interesting opportunity to me.

Does it grab your attention?

The first rule of finding any kind of guitar is to look where the guitars are.  More and more for me this is various types of online retailers for new and used gear, but whenever I travel I like to check out the music and book stores and see if anything catches my eye.  On a day trip out of town,  I found a small mom and pop music store and took a quick peek not really expecting to find anything.  After poking around for a moment, I happened to see an acrylic Les Paul copy on display and it’s clear body and gold colored hardware immediately got my attention.

Before you consider the attention grabbing requirement to be too vapid a consideration, let me throw out a Mark Sandman story that you won’t find in the Morphine documentary. Mark used to drop into Sandy’s Music in Cambridge Massachusetts (where I worked for several years) on occasion to see what kind of gear would come in.

The few times he actually found a bass that interested him his primary purchasing decision after a brief examination was how it looked when he wore it with a strap.  This required pulling a mirror up from the basement so he could check himself out and see how it looked when he played it. (I guess when you play a two string bass with a slide a lot of the typical purchasing factors aren’t as important as they might normally be….)

While I’ve seen plenty of acrylic guitars in print (most notably the Ampeg/Dan Armstrong collaboration models), I’d only seen a smattering of them in stores over the years and I was intrigued at what it would sound like.  This leads to one of my important considerations in buying a guitar namely,

Is it a good deal?

The shop owner saw me checking it out and while I assumed that it was a show piece but she explained to me that it was for sale at a low price with a case.  I didn’t recognize the brand name, but a quick iPhone search revealed that the guitars sold new for under $350 – so I figured that at the price they were offering it at it might be worth getting as I knew I could sell it if I got it home and hated it. A guitar is a good deal if you think that it’s value is more that what someone is asking for it.  I have no hate for higher priced guitars, but I never understood the point of spending 10 or $20,000 on an electric regardless of who made it or what it was.  There are amazing high end builders out there but I’m really more about guitars that play well.  If you’re a good player, you’ll be able to play any well made instrument and have it sound like you and there are a number of well made instruments out there at very affordable prices.

The “Secrets” of what to look at when buying a guitar

Once I get past the obstacle of determining if this is something I can afford, there are a few general things that I’ll look at in a used guitar.

3. Has it been repaired? 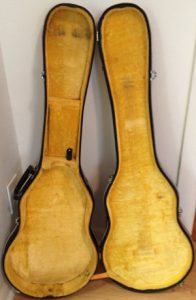 but it does make a difference in that it provides a way to get the instrument home.  Most stores can at least throw in (or deeply discount) a gig bag if the guitar doesn’t come with one, but there’s really no reason to walk out of a guitar store with an instrument and nothing to carry it in.

How to check a guitar in a music store.

First, a note for acoustic guitar purchases – if you’re playing an acoustic at Guitar Genter, you should know that it’s going to sound completely differently when you get it home. Why, you ask? Because when you try out a high end guitar in a small climate controlled room, you’re listening to it with a series of other resonating instruments around you picking up vibrations of what you’re playing.  If I’m trying an acoustic instrument, I’ll play it in the acoustic room and then check it out in the main room as well.  In some smaller stores, there is no work around for this – you just have to be aware that you’re not going insane – the guitar really does sound different than it did in the store.

Before I do any playing the first thing I’ll do is sit down with the guitar and a tuner and tune it up.  I’ll use this time to check intonation and check how it holds its tuning as well.  On a hard tail bridge, tuning problems could be from bad tuners, old strings or strings binding at the nut or the bridge.   The guitar’s tuning was slipping a little but i didn’t think it was going to be too problematic.  Once I got the guitar home, a little string lubricant showed me that the nut was fine and that the culprit was the tuners. I ultimately replaced them with Planet Waves locking tuners but swaped out the tuning knobs with the original  to make it more Les Paul-ish.

For electric guitar players – here’s the real secret about buying guitars: At least ½ of your sound is in your hands. This means that at least ½ of any electric guitar’s sound is how it sounds unplugged.  If the guitar sounds like crap unplugged then all the pickups can do is make it sound like louder crap when it’s plugged into an amp.  So before I even plug anything in I’ll play it for a couple of minutes acoustically. What really surprised me about the Galveston was that the notes resonated really well.  I didn’t have an opinion about acrylic as a guitar material before – but I was surprised that the tone sounded good.

When checking out a guitar lot of people play riffs but playing something in one position won’t tell you a whole lot about the sound of the guitar.   In contrast, I’ll normally play a lot of single string melodies to see how the frets are all the way up the fingerboard.

Here’s the “rig” I used or this setting.

I don’t know how any one else feels about the mp3, but to my ears the guitar sounds pretty good!  Even with the cost of the tuners and the set up the Galveston was a cheap enough expenditure that I could sell it and make some money if I absolutely had to.  In terms of the feel of a shorter scale length, while the strings may have been slightly easier to bend, I didn’t really perceive a dramatic difference with a standard scale length.   Sonically, I noticed that the notes had less snap in the attack than a standard scale length but given the timbral balance and sustain of the instrument, the difference wasn’t substantial.

My best advice in buying a second guitar is when looking past the name on the headstock or the material of the body or neck to simply ask the question – does it speak to you?  If it speaks to you, you can have a conversation and hopefully that’s a discussion other people will want to hear as well.

“– does it speak to you? If it speaks to you, you can have a conversation and hopefully that’s a discussion other people will want to hear as well.”

I had to read the whole thing to get there (clever boy!), but there is the most important point in the post. I think that’s the reason I spend so much time with inexpensive guitars. The expensive ones all speak to me, sometimes in a negative way, but the inexpensive ones each have a personality that is sometimes worth exploring, even if it is from “Acme Guitars”. I’ve found some real gems that way.

I love the fact that there are billions of people on the planet and yet you’re the only one who ever responds to any of these articles. ; )

Love the fact that your guitar “arsenal” consists of personally made custom instruments, acoustics from former cold-war enemies, and left overs from the petro-chemical industry… and they all sound like you!