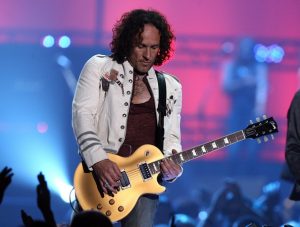 Just as Black Sabbath’s Tony Iommi has started to open up about his cancer treatment, news comes in that Vivian Campbell is dealing with his own, similar medical issues.

Campbell says he feels thankful for the “cough that wouldn’t quit” – as it was his only clue that something was amiss. After a few months of trying inhalers and other treatments, his doctor finally ordered a chest x-ray, and discovered that enlarged lymph nodes were causing the cough.

Vivian missed the first of the Def Leppard Viva Las Vegas rehersals to have a biopsy performed, where they found out what was causing the enlarged lymph nodes – a rare form of Lymphoma called “Hodgkins Lymphoma”.

Currently, Vivian is in month two of the 6 months treatment for a type of cancer that is not only rare, but very treatable, with an 80% recovery rate.

Vivian posted on his website that he wanted to let people know that he will be a part of the Def Leppard’s tour, and that he might be sporting a hairstyle that looks a little more like Joe Satriani than the Vivian Campbell we’re used to. Vivian calls it a “more aerodynamic” hairstyle.

Fans have certainly shown their support on Vivian’s facebook page, where inspirational and uplifting comments have already reached near 2,000 at the time of writing.

Vivian seems to be dealing with it well, which reminds me of a certain Tony Iommi, who has been a champ with the current Sabbath tour – working the gigs around his treatments, and flying back and fourth to the hospital in his hometown to make them on time.

During a time when Tony Or Vivian would have every reason to put tour plans on hold, both guitarists are displaying an amazing attitude regarding what is probably the scariest diagnosis you can get. Thankfully for both, the diagnosis is manageable, and the future looks bright.

I really think it’s great that they have both adopted the “still rollin’, keep a-rollin'” attitude and have decided to continue with their plans for touring, and I think this is why they do what they do – they love it so much, and can’t imagine anything keeping them from doing it. Also, it’s always been said that one of the best things you can do for any health condition is what makes you happy, things that put a genuine smile on your face – and for these two guitarists, getting out there and sharing their talents and music with the fans is what does that for them.

The Northern Irish guitarist has been with Def Leppard for 21 years. He joined the band in 1991. Before Def Leppard, Vivian made a name for himself playing with Dio, Whitesnake, Lou Gramm, Thin Lizzy, and more.