“When the seductive crooning of Natasha Nicholson met the crushing sounds of distorted guitars and sovereign drumming, she found a safe haven for her voice and a way to reach the soul of the fan, at the depths of their emotions.” – Eye Ra Haze Website 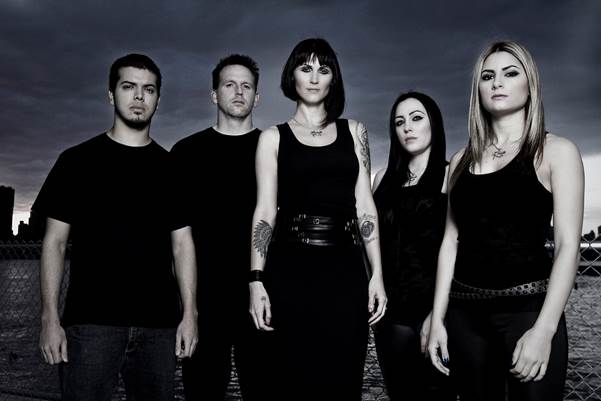 Eye Ra Haze is a NYC based progressive metal band whose sound is (at least to me) a new and fresh twist on the Nu metal / Alt rock genres. The melodies are haunting, and the guitars are heavy and deep, but still leave just the right amount of breathing room in the mix.

When I first heard Eye Ra Haze, I was pretty floored. They’ve managed to combine musical elements into their metal style that I’ve been wanting to hear in a band for a long time. The music certainly addresses any metal fan’s need for the heavy sound, but combined with the sometimes haunting melodies and lyrics, the listener is also transported to a place deep within, where there is much more to think about – and maybe even question.

It’s hard to combine a great metal rhythm and a mystical melody – at least it’s hard to do it right – but that’s exactly what Eye Ra Haze has done.

This band is the complete package.  It has the talent, insight, impressive songwriting and production, and I’m certain after hearing their sound you too will be wanting to hear more!

Eya Ra Haze will be releasing a new EP, entitled Eye Of The Storm, and it will be available on June 11th. It was recorded and produced by Chris Harris, who is known for working with bands like Soulfly, Hatebreed, and Shadows Fall.

You don’t have to wait to hear this band – they’ve made a video available for the track, New Beginning.

Natasha Nicholson is from L.A., and provides the heartfelt and enchanting vocals that really make this music tick. You’ll enjoy hearing Natasha’s emotion and perfect vocal placement complimenting the deeply rhythmic guitars on this EP.

Nicole Papastavrou handles the guitar duties, and she does it with authority – making good use of all the low end crunch her 8 string has to offer. Her job is tough – providing the rhythm as well as melody – and she seems constantly aware of her connection to the drums and where that intersects with the melody. I’m sure we’ll be talking about Nicole a little more in the future!

Karine Catenacci comes from a classical piano background and has studied singing as well. Karine came to NYC just a few years ago from Quebec, with very little knowledge of the English language, where she met vocalist Natasha Nicholson on a tip from Natasha’s husband. Karine is responsible for that ambient sound you hear in Eye Ra Haze, but you’ll also hear plenty of melodies from the keys on this EP as well.

Kevin Corcoran handles the drum duties for the band, and it’s far from disappointing. Kevin grew up in Buffalo, NY and toured the world with his previous band, Buried Alive.

Enrique Mancia – He’s the bassist and newest member of the band, and comes from Spain. You’ll hear him quite clearly on this mix, not only in the form of rock solid bottom end, but in his extremely tasteful fills and walking riffs that weave intricately around some of Nicole’s clean guitar parts.

Get Eye Of The Storm

You can get the tunes on iTunes, as well as Amazon.