Check Out Joe Satriani’s New Song, “A Door Into Summer”

If you’re having trouble waiting until the May 7th release of Joe Satriani’s latest album, Unstoppable Momentum, here is a little gift from Joe – just for you. It’s a video for one of the songs off the new album – “A Door Into Summer”.

Joe Satriani – A Door Into Summer

The song is about Joe’s love of a new summer season – something he’s been a fan of ever year since his school days, where he (like every school kid) eagerly anticipated the arrival of summer. It’s a feeling he says has stuck with him over the years, and surfaces even today.

“The song celebrates the coming of summer and the promise of adventure, fun and coming of age, it’s a song about my high school memories lasting a lifetime and still giving me that good feeling when summer rolls around. 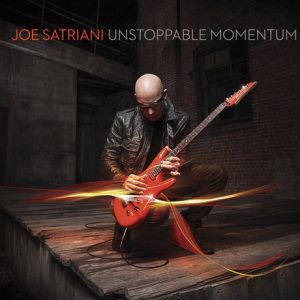 The song was originally written with the thought that it might be a good song for Chickefoot – with Sammy Hagar providing vocals. Joe says that during the Chickenfoot III sessions they never got around to working on it, which didn’t bother him much – because he eventually pulled it back out for Unstoppable Momentum.

The album will be released May 7th, by Epic records. Satriani says the album will branch out in many directions – the musical styles and influences will vary greatly from track to track.

It will be Joe’s 14th studio album, and there will be a tour following – as usual – which will include Marco Minnemann on drums, and Bryan Beller on bass. That’s two-thirds of The Aristocrats! Very nice.

The Artists on the album:

The new release will include Mike Keneally on keyboard. He’s well known for being Frank Zappa’s “Stunt Guitarist”, and for playing guitar and keybaords on Zappa’s 1988 tour.

On drums, we’ll hear Vinnie Colaiuta – a very busy man. Vinnie also has worked with Zappa, Joni Mitchell, Sting, and plenty of others.

Rounding out the group on bass will be Chris Chaney, who is known for providing the low end for bands like Jane’s Addiction, Slash, Alanis Morissette, Methods of Mayhem, and many more.

Mike Fraser took on the engineering and producing duties – a man known best for his work with Metallica, Aerosmith, The Cult, AC/DC, and too many others to mention here.

There is plenty of talent on this record – so we’re expecting this to be yet another killer Satriani album.