“Let’s Get Tooled Up!” – Tools You Should Have In Your Gig Bag. 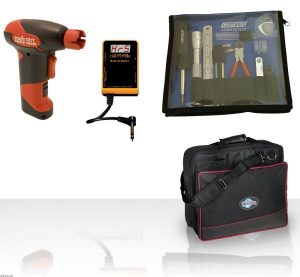 In the last article I gave you a list of spares you should probably have in your bag.  In the next couple of articles we’re talking tools!

Since I started playing in bands, I’ve been accumulating tools in my gear bag.  A few years ago it all got a bit out of hand when I realised I was taking enough tools out on a gig to rebuild an amp, the lighting rig and fix the engine on my car.  Well, not quite, but I did realise after the handle snapped on my bag that I could probably get away without a full screwdriver and socket set.  First, the essentials to have with you at all times.

1. Multi-tool. You know the things I mean – generally these useful things have pliers (With a wire cutter/stripper), a couple of screwdrivers, and a blade, as well as various tools for getting stones out of horses hooves.  You’d be amazed at the things you can fix with them – Tighten nuts! Cut strings! Screw stuff!  For emergency fixes they’re worth their weight in gold, and I don’t like to be on a gig without one!

2. Flash light/Torch. I don’t know about you, but I generally play gigs at night, on dark stages in dimly lit rooms.  Rather than trying to hold your cell phone between your teeth and keep pressing buttons to allow the screen to cast a dim glow over the back of your amp rack, or risk a call to the fire department by waving a lighter around, treat yourself and get a flash light.  If you get a nice bright, small one with LEDs in it, the batteries will last for ages, you’ll never have to change the bulb.  They’re also dead cheap, and when you’re poking around in the darkness backstage trying to fix a pedal, you’ll thank me!

3. String winder. These are brilliant.  Some people complain that they break machine heads by putting too much strain on them.  All I will say is that I’ve been using them on all of my guitars for the last 20 years and I’ve never had a problem.  The time they save is worth the risk if you ask me, especially if you’re trying to change a broken string on stage in the middle of a set, which has been known to happen.

4. Tape. I like to have a roll of electricians PVC tape and a roll of duct tape around when I do a gig.  From holding set lists up and temporarily repairing broken solder joints to fixing your favourite shirt you just ripped a hole in, tape is useful and cheap, so get some.  At least one roll should be white or grey, so you can write on it.

5. Other tools. Take a look at your rig.  If your guitar or amp has odd sized screws, bolts or nuts on it, then go to the hardware store and get a tool that fits them.  Hopefully you’ll never need it, but if you do, you’ll be grateful!

6. Power Extension Lead. Not, strictly speaking, a tool, but very useful if you have to set up away from a power outlet.  And get a nice one and look after it – no exposed wires please!

7. Marker Pen. Get a medium sized permanent marker to write stuff down with.

Next time – Coping With Gear Related Gig Emergencies Part 2B. Or “I’m Gonna Fix You Good…” – Tools You Should Have At Home.