Cryptopsy is a band that has changed their lineup more times than the average every day Joe does his underwear. No two releases of any sort, CDs or DVDs, have ever featured the exact same lineup and with that each release shows a much different side of Cryptopsy as this ever morphing thing.

Their self-titled release isn’t any different in that it’s the first album since the departure of long established bassist Eric Langlois with Oli Pinard as his replacement and the return of Jon Levasseur on guitar accompanied by Chris Donaldson. Matt McGachy continues as the vocalist, filling a position that has been as heated a debate in the death metal world as the Sammy Hagar / David Lee Roth debate in rock, and Flo Mounier remains the spine that’s held Cryptopsy through their ongoing changes.

Cryptopsy the Self Titled Album 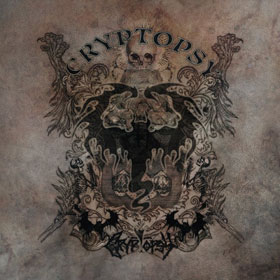 I’ll be honest. Going into this I was expecting the worst. With The Unspoken King as my last impression on where Cryptopsy stood in their decisions to take the band I had all but lost hope. When I had heard Jon Levasseur rejoined I figured I’d give it a chance as a skeptic and see what happened. How does it fair?

I don’t want to that guy that runs around screaming “old Cryptopsy is back” but in a lot of ways they are. This is the closest album they’ve released to what None So Vile was only with crisper and cleaner production.

That isn’t to say they’ve just redone their older stuff, far from it. Cryptopsy’s established a reputation of being up for experimentation and they continue here, only with less excessive and over the top complex guitar parts that have been balanced by solid and pummeling rhythms from cover to cover. I’m sure a number of people will gripe a bit about the rhythms in some rage against breakdowns, but really there isn’t anything of the sort on this album they haven’t done since None So Vile anyway, so I wouldn’t really call it a problem.

It’s much more of a straight forward death metal album than Cryptopsy’s been in a long time, but their varied influences are just as prominent if not from the constant change in minds contributing alone. Jazz remains a prominent influence ad is well developed in Red-Skinned Scapegoat and the band even treads into new styles like elevator music.

Musically the album is much better than I expected it to be. And that’s coming from a guy that was ready to drag it into the street and ridicule it before I’d even heard anything.

Production over the course of Cryptopsy’s career has gone through as many stylistic changes as any other aspect of the band. To put it in perspective their debut album Blasphemy Made Flesh had atrocious production. Everything muddled together and was overall barely audible. None So Vile had volume and clarity on its side, but still retained a bit of grit to it. Each instrument was easy to hear and they all really melded together. But from Whisper Supremacy onward their music had taken a turn towards exceptionally clean production with drums very high in the mix often to the point of drowning out the guitars.

I’ll say it plainly. I think Cryptopsy has the best production since None So Vile. The guitars are strongly present in the mix and the drums hammer away like a rivet gun to the eye balls. Nothing competes to be heard over anything else. It’s great.