It wasn’t all that long ago that I was among the many people who make fun of Daisy Rock guitars and the people who play them. After all, who can take a guitar that is shaped like a flower or a heart (these are two of the Daisy Rock designs) seriously? Also, being a woman, I had to deal with many years of not being taken seriously as a musician. The last thing I wanted to do was get a “girl’s” guitar! 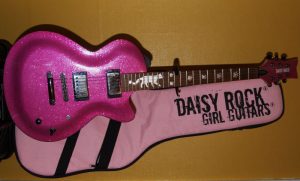 Then I saw something that started to change my mind. Duff Goldman of Charm City Cakes and star of the television show, “Ace of Cakes”, was asked to make a cake shaped like a Daisy Rock guitar. He was thrilled, and said on camera how much he loved playing his own Daisy Rock. Huh??? A guy playing a Daisy Rock??? Hmmm…maybe it was time for me to take a second look and try one out before making any more judgements.

As I started researching Daisy Rock guitars, I learned that the only real reason that they are advertised as being guitars for girls is because they are a lighter weight than other guitars and that they have a slimmer neck, great for someone like myself with neck and arm problems. Of course, I wasn’t totally convinced yet.
I began talking to other musicians about Daisy Rock guitars. I was surprised to learn that some of my male friends actually have or at least want one of these guitars (well, maybe not the heart or flower–shaped models, but then again, you never know) . These guys all said that they loved playing their Daisy Rock guitars on stage because they are lightweight and easier on their backs they play great, and they just look really cool. I started to seriously look at the different models available. Then, I took a look at the list of well-known musicians who use them, including:

My next step was to try one out at a music store. I was quite surprised to find that not only did I like the way the Rock Candy Classic looked, I loved the way it felt in my hands and how it sounded when I played it, but I left the store with an Ibanez instead. A couple of months later I still couldn’t get that Daisy Rock out of my head, and I ended up ordering it in Atomic Pink…so much for not getting a “girl’s” guitar!

The only thing I didn’t like about it were the star-shaped fret markers, but I covered them with decals that look like a cat and paw prints and cost less than $10 per set (they stay on great too, even when I’m playing hard and sweating). Now my Daisy Rock is my favorite guitar I have ever owned, and the only one I ever named. I figured since she is as pretty as a showgirl, she would forever be known as “Lola”. Never again will I make fun of Daisy Rock guitars, and I am proud to say I own the prettiest one of the bunch!