In League With Corey Taylor and Paul McCartney

Business is looking good for Dave Grohl’s on his impending supergroup, the Sound City Players, with a handful of updates showing off the progress they’ve made so far, and just how little time it took to make it all happen. Here we are covering his personal work with Slipknot and Stone Sour frontman Corey Taylor and the Beatles’ Paul McCartney.

Cut Me Some Slack 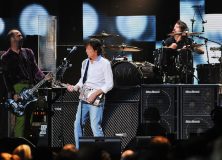 “Cut Me Some Slack” is the name of the song to be featured on the upcoming Sound City Players album Real to Reel that was written in collaboration with none other than Paul McCartney.

The backstory behind this song is that it was written and recorded in about three hours. The two musicians got together and started jamming and the song just fell in place along the way. They recorded the song live and threw a vocal track over top and boom. Song done.

Dave Grohl’s dropped the P word when he described the whole process as perfect and commented that the best songs just happen like that without any premeditation. The absence of a staff of song writers, producers, and excessive hardware that would normally mire the experience with a feeling of standard procedure made it much more an experience of just making music happen. While still speaking of the experience he spoke very highly of McCartney as the nicest guy around.

Fun fact: Grohl and McCartney, alongside former Nirvana band mates Krist Novoselic and Pat Smear, had performed “Cut Me Some Slack” live for the first time twice on 12/12/2012, and again a few days later on Saturday Night Live. Just below is a video of the very performance that introduced the world to this song.

From Can to Can’t

The newly released song “From Can to Can’t” was featured to give people a taste of what the band has had in store. It featured Slipknot / Stone Sour front man Corey Taylor who was backed by Cheap Trick’s Rick Nielsen on guitars and Kyuss’ Scott Reeder on bass with Dave Grohl supplying the drums.

I have opinions to express, but if you want to hear the song without the influence of another’s thoughts first you can listen to it here.

Personally I think the song turned out really well. You really get the feeling that you’re hearing music just happening. Not something that was meticulously sculpted to fit changing trends. I was but a lad in high school when Slipknot seemed to take the world by storm and it’s really enjoyable to hear how much Corey Taylor’s grown as a vocalist. Rick Nielsen’s guitar playing is crisp and moody and locks right in with the drums and bass which both really help move the wave-like emotion throughout the song. In short it’s good.

Just last night the Sound City Players came to the stage and made a believer out of everyone with a set that consisted of about 38 songs out in Park City, Utah. Dave Grohl was joined by the musicians collaborating on the Sound City soundtrack to perform selections of music from their respective bands and projects. The performance came to be as elaborate and majestic as it has been made out to sound on paper, and overall made for a riveting experience.