Don’t Bullsh*t Me, Buddy – The Pitfall of Guitar Salesmen

A good sales rep can help you find the perfect instrument. A bad one can chase you right out of the store.

Even though I don’t buy as many guitars now as I once did, I still love shopping for them. There’s nothing like walking into a room full of beautifully crafted wood and steel, being seduced by several pieces and having no choice but to gently pull them close, one at a time, and see which of us were made for each other. It nearly makes me swoon to think about it. 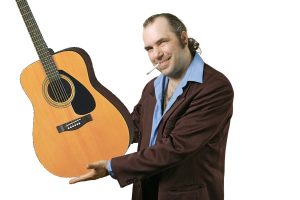 Having taken part in this ritual for many, many years—and having been a music professional during most of that time—I have a pretty fair idea what I need and what appeals to me. I’ve become fairly well versed in what to expect from different styles of guitars, and I can usually tell within a few seconds whether or not a particular instrument and I are wasting each other’s time. Similarly, I can easily tell when one jumps out of the pack and establishes itself as a special instrument.

So with that in mind, I’ll confess that I really don’t like being hyped by sales people. I appreciate assistance. I don’t mind friendly dialogue. I understand the need to monitor expensive Martins, Collings or other high-end instruments to minimize damage from bad players who club guitars instead of caressing them. I get all that.

But I don’t like hovering; I don’t enjoy being told how good something is, based on its price tag; and I absolutely detest some punk with half my chops demonstrating a guitar for me. News flash: I’m not gonna like something better with you playing it, if I don’t already like it with me playing it.

I’ve played expensive guitars that would be better suited as boat oars. I recently played a $10,000, boutique arch-top that needed fret work (they literally snagged my fingers above the 7th fret). I played a beautiful Martin that was so tonally imbalanced I couldn’t even hear the top three strings. And yet, here was Mr. Chippy Sales Dude telling me what great instruments they were.

When he asked my opinion, I lavishly praised a couple of Martins that I would have bought on the spot, if only I had the extra $12,000. But I also leveled with him. If a guitar sounded young and undeveloped (which, by nature, most new guitars do), I said so. If they sounded like the top was clamped (not vibrating) or sounded like cardboard—and a couple did—I mentioned it.

So what’s my point? It’s simple: I don’t appreciate a sales person trying to sell me a load of manure. I realize that a lot of guitar shoppers are idiots who play too loud, aren’t careful with the guitars and aren’t respectful of anyone else in the store (don’t get me started on the ones who sing in the music store—there’s a special little corner in Hell for them). These folks all need a spanking and I don’t blame retailers for complaining about them.

But on the flip side, I’m not one of those morons. So please, Mr. Ace Guitar Seller, learn to tell the difference, develop some discernment, have a little respect—and don’t push me out of the store.

That’s it—that’s today’s sermon. Cue the choir. But most of all, when it comes to the guitars, please … don’t bullshit me, buddy.

Having experienced both types of these salesmen (?), I am very picky about the music stores I patronize. For example, some Guitar Centers are just great, others are the pits and won’t even acknowledge your existence.

When I was 15, I was eyeing a Martin D12-35 at a local store. One old curmudgeon salesman wouldn’t get it out of the cabinet (“That’s an expensive guitar, son, don’t want it to get banged up.”). I caught another salesman who pulled the guitar out for me and let me play it. I bought it that night. I was so happy the first old fart didn’t get the commission.

Then there is the other side, the ones who are so lazy you can barely get them to pull a guitar down for you to check out!