“They stay in tune and the necks are straight. They are also good for expert players who need a guitar to ‘kick around with’.” – Rondo Music

Are you tired of seeing exorbitant, unreachable guitar prices? Can’t afford Gibson, Fender or a PRS? If an Epiphone or a Squire just won’t cut it, then why not take a look at Douglas Guitars. When it comes to either electric hollow or solid bodies, the name Douglas may not be a household word. Nevertheless, there is no denying the numerous guitar models that Douglas offers. What’s more, they are all ridiculously affordable. 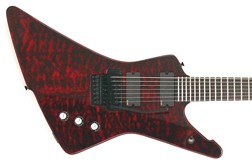 Douglas guitars are manufactured in China, Korea and Taiwan. In the United States, the Douglas line of instruments is chiefly distributed by Rondo Music, “an American owned and operated family business, founded in 1959.”

Apparently, other companies sell the same products under a variety of brands. The Rondo website points out, “These guitars are essentially the same guitars with a different name printed on them.”

You have to wonder: Are the factories churning out higher priced imports for major names in the industry, creating the same guitars for companies like Douglas, but at a friendlier cost to consumers?

Something Else to Think About

For those pickers and strummers who only believe in sticking with guitars whose brand names begin with either the letter “F” or “G,” think about this.

On the road to becoming a manufacturing force to be reckoned with, Ibanez started out years ago, copying most of the top selling electric models at the time. Though the company eventually got into some copyright entanglements, it has also produced some excellent quality guitars, now used by such notable artists as Steve Vai and Joe Satriani.

This is not to say Douglas Guitars is following the same route as Ibanez. However, Douglas does offer a vast assortment of models that are certainly meant to compete in the current marketplace, everything from a Strat, Tele or Les Paul type, to an Explorer or a flying V and beyond. Who knows, in the future, maybe a Douglas guitar will be seen in the hands of some famous blues slinger or ambidextrous rock god.

We looked at the stats of the Douglas gold top “Shadow,” which has a Les Paul style body and pick-ups and then matched it up against the real thing. Considering the legendary status of the Les Paul, there is no real comparison to be made between these two. Nevertheless, since there are far too many players who can’t afford any Gibson products these days, the evaluation alongside the Douglas “Shadow” seems logical.

And Now for the “Shadow”

Douglas Guitars “Shadow” is a single cut away arch top, just like a Les Paul. The Douglas has a convincing vintage appearance, owing to its gold finish, white pickguard, chromed out hardware and stop-bar tailpiece.

Both the “Shadow” and the Paul have a 24.75 scale length and classic trapezoid fretboard inlays. However, that’s where the similarities end.

The first significant aspect of the Les Paul, whether Standard or Traditional, is a mahogany body and maple top; the “Shadow” uses Alder for its tonewood. Another vital difference, Douglas makes use of a bolt on neck where Gibson is famous for its mortise and tenon design. Typical Les Pauls don’t use a bolt-on design.

Though the “Shadow” can’t boast of having Billy Gibbons “Pearly Gates” pick-ups, or a duo of traditional Gibson PAF’s, it does come equipped with two potent humbuckers.

The Douglas Guitars gold top “Shadow” is probably best suited for new players or those who are willing to hot-rod it out a bit, like swapping for higher end pick-ups and having the action adjusted. Also, considering how inexpensive electrics often work so well for slide guitar, the “Shadow” presents another option.

Some online customer reviews have noted the finishes on some Douglas guitars has been less than that of its competitors. Other than that, they’ve generally received positive feedback. For the price, Douglas can’t be beat. Go for it.

I want to know how I can buy o douglas guitar and see what models they have.

Been a Fender bass player for over 40 years. Sprinkle in a Rickie 4001 and a Gibson Explorer bass and there’s the majority of my axe collection. I never heard of Douglass Guitars before today. I saw a used V string Douglas bass on sale for under $200 and thought it might be an interesting axe to buy for fun. Then I saw the countries where they are made and thought of the other brand basses I’ve played over the years that were flimsy, like toys and began to doubt the Douglas build/quality. I figured that I’d ask here for the true skinny but now I think it might be a waste of time. You see, they aren’t for sale…..ANYWHERE! That does not inspire confidence, so I don’t think I’m gonna buy that used V string. Unless you guys tell me how wrong I am!!!! lol

I have 2 semmi Hollow Douglas Guitars, Finaly I found my perfect Sound. I play on Ñeco Peña Band.

As hobbyist the douglas line from rondo is a great value for the $. I have their 6 string bass and the 7 string bartone. However, the strings are low end quality and not pre-stretched before they are installed. so plan on replacing the strings. But as a “$200” musician. They provide great enjoyment